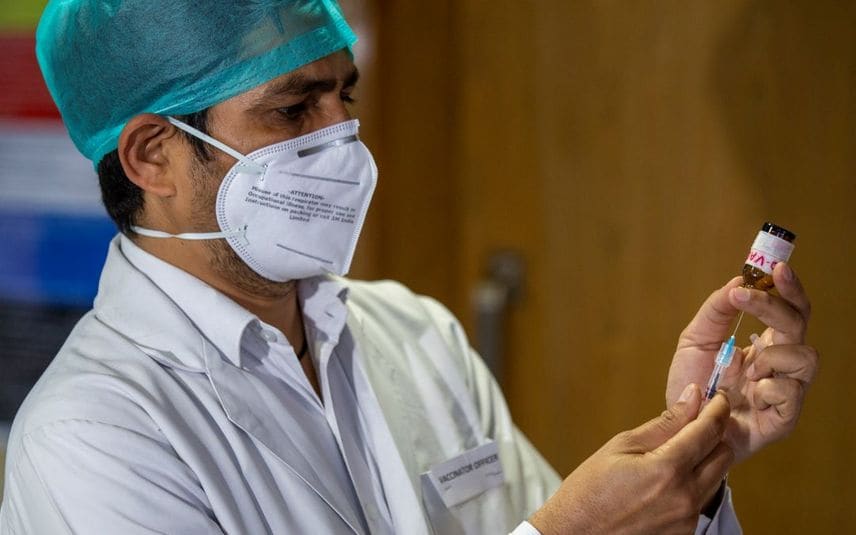 New Delhi: Glitches in Co-WIN application and vaccine hesitancy continued to reign over the second day of the Covid-19 inoculation drive as the turnout remained shockingly low at many government hospitals of the national capital on Monday.

Meanwhile, sources at Lok Nayak Hospital said that the inoculation count remained around 25 there.

Suresh Kumar, Medical Director of Lok Nayak Hospital, however, did not divulge the exact figures to IANS but said that the participation was less than the previous session.

The hospital had inoculated 32 people on the first day of the immunization drive.

Ajeet Jain, Medical Superintendent, RGSSH said that the vaccine hesitancy is still reigning supreme among their staff. We will conduct a large scale counselling session to combat it," he added.

Pragya Shukla, nodal officer of Covid immunization at DSCI, said that the hospital had to manually inform the beneficiaries since Co-WIN app failed to do so.

"The people scheduled for immunization today did not receive an alert from the app. We had to call everyone and request them to participate in the drive," she added.

Shukla also said that the institute received the list of beneficiaries registered themselves for immunization drive late from the area's district magistrate which led to further delay.

Besides, many beneficiaries featured in the list had already been inoculated the previous day, she added to the reasons for the low turnout at the centre.

However, Ram Manohar Lohia (RML) Hospital told IANS that it conducted immunization of 69 people at the centre, which is double the count of people who participated in the previous session there.

Meanwhile, as many as 7,891 health workers have taken the Covishield vaccine on the second day of the inoculation drive in Kerala, Health Minister K K Shailaja said.

The state had targeted inoculating at least 11,851 people from 127 centres on the second day of the vaccination drive. Of this, 66.59 per cent people had received the jab, the minister said in a release.

The vaccination drive was held in 11 centres in Kozhikodedistrict, eight centres in Ernakulam and in the remaining districts 9 centres each.

In some small centres since the vaccination of those who had registered have been completed, new centres are being readied, she said.

Palakkad district recorded the highest number of vaccinations (657) on Monday, followed by Malappuram (656) and Kozhikode (652).

None of those who were administered the vaccine have complained of any side effects.