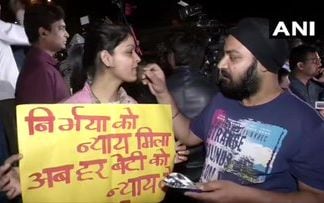 New Delhi: As the clock struck 5.30 a.m. on Friday the crowd assembled outside the Tihar Jail burst into celebration and even distributed sweets.

As the countdown to the hanging of four death-row convicts in the Nirbhaya gang rape and murder case entered its final phase, the crowd loudly did the final countdown; a handful of posters reading "thanks to judiciary" and "the morning of justice" also were propped up outside the Tihar Jail premises.

The four rapists were finally hanged seven years after they and two others brutally gang raped the 23-year-old physiotherapy student and left her to die by the roadside.

Check facts before sharing on social media: PM Modi on war against fake ...

PM Modi moots idea of "One Nation, One Uniform" for police