The bridge was recently reopened for the public after renovation. 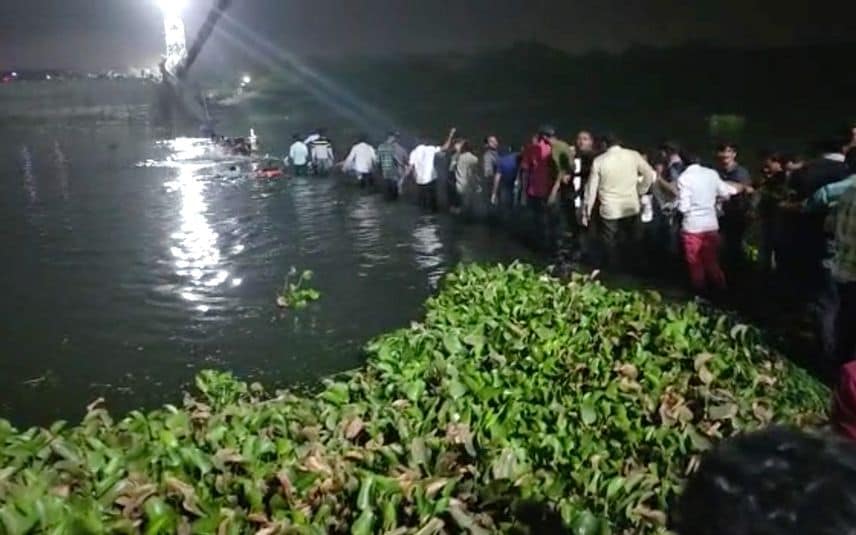 Gujarat: At least 60 people died after a suspension bridge, nearly a century old, on the Machchhu river in Morbi here collapsed this evening. Several people standing on the bridge fell into the river, local officials said. It is reported that 60 bodies were recovered, of which more are of children, women and elderly. The rescue operation is being carried out under NDRF.

Prime Minister Narendra Modi on Sunday announced an ex-gratia of Rs 2 lakh for the families of each of those who died in a bridge collapse in Gujarat's Morbi city.

Modi also spoke with Gujarat Chief Minister Bhupendra Patel and other officials regarding the incident. He sought urgent mobilisation of teams for rescue operations, according to the Prime Minister's Office (PMO).

"PM Narendra Modi has announced an ex-gratia of Rs. 2 lakh from PMNRF (Prime Minister's National Relief Fund) for the next of kin of each of those who lost their lives in the mishap in Morbi. The injured would be given Rs. 50,000," the PMO said in a series of tweets.

"PM @narendramodi spoke to Gujarat CM @Bhupendrapbjp and other officials regarding the mishap in Morbi. He has sought urgent mobilisation of teams for rescue ops," it said.

The prime minister has asked that the situation be closely and continuously monitored, and all possible help be extended to those affected, it added.

The bridge, which was recently reopened for the public after renovation, collapsed as it could not bear the weight of the people standing on it, the officials said.

"Due to the bridge collapse, several people fell into the river. A rescue operation is underway. There are reports that several people have suffered injuries. They are being rushed to hospitals," local MLA and state minister Brijesh Merja said.

According to eyewitnesses, there were several women and children on the hanging bridge when it snapped.