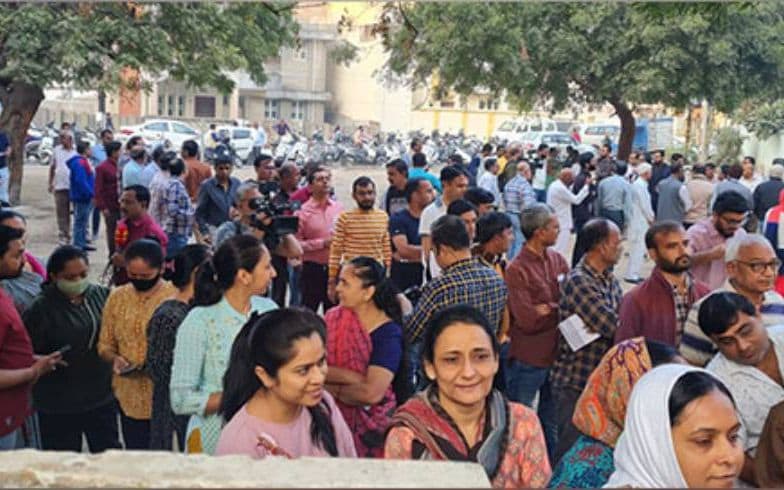 People waiting to cast their votes in Gujarat | Photo: ANI/Twitter

Gandhinagar: Polling for the first phase of the Gujarat Assembly election began at 8 am on Thursday amid tight security arrangements.

The fate of the political parties will be decided by over 2 crore voters today, with 89 constituencies spread across 19 districts of Kutch, Saurashtra and South Gujarat going up for polling.

Live webcasting of 13,065 polling booths in 19 districts will be done during the first phase of voting. A state-level monitoring room is functioning at Gandhinagar by the Chief Electoral Officer. There will be continuous observation from 6.30 am till the completion of the voting process, according to the EC.

As per the instructions of the Election Commission, the entire arrangement has been made. In the first phase, voting will be held at a total of 25,430 polling stations. Out of these 13,065, polling stations will be webcast live.

A State Level Monitoring Room has been set up by the Office of the Chief Electoral Officer, Gandhinagar at Vidya Samiksha Kendra in Gandhinagar, from where all these 13,065 polling stations will be closely monitored. As many as 42 staff/officers in this monitoring room will continuously monitor the webcasting of polling stations before polling begins at 8:00 am. As many as six senior officials will monitor the polling process through webcasting from this state-level monitoring room. Continuous observation will continue from 6.30 am till the polling process is completed.

Prime Minister Narendra Modi and Home Minister Amit Shah held rallies and roadshows in the state as the BJP seeks a record seventh term in office.

Former BJP MLA Madhu Shrivastav is contesting as an Independent from Vaghodia.

The counting of votes will be done on December 8. Results of the Himachal Pradesh assembly elections will also be declared on the same day.