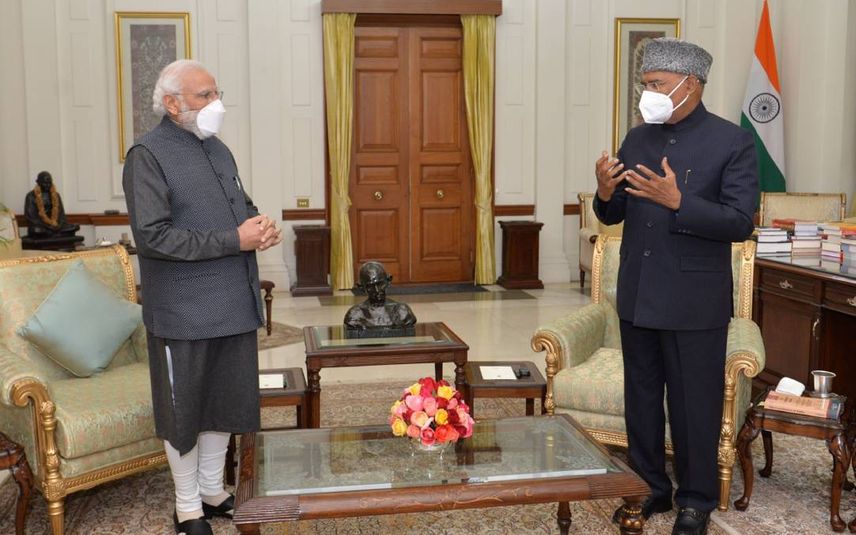 New Delhi: Prime Minister Narendra Modi on Thursday thanked President Ram Nath Kovind for his concern for taking a first-hand account of the security breach in his convoy in Punjab yesterday.

Taking to Twitter, PM Modi said, "Called on Rashtrapati Ji. Thankful to him for his concern. Grateful for his good wishes, which are always a source of strength."

"President Ram Nath Kovind met Prime Minister Narendra Modi at the Rashtrapati Bhavan today and received from him a first-hand account of the security breach in his convoy in Punjab yesterday. The President expressed his concerns about the serious lapse," the President of India tweeted.

Earlier today President Kovind had expressed concern about the security breach in Prime Minister Narendra Modi's convoy during the latter's visit to Punjab.

PM Modi was scheduled to visit Ferozepur on Wednesday to lay the foundation stone of multiple development projects worth more than Rs 42,750 crore.

Earlier on Wednesday, the Home Ministry said in a statement that PM Modi landed at Bathinda on Wednesday morning from where he was to go to the National Martyrs Memorial at Hussainiwala by helicopter.

Due to rain and poor visibility, the Prime Minister waited for about 20 minutes for the weather to clear out.

The statement said that when the weather did not improve, it was decided that he would visit the National Martyrs Memorial via road, which would take more than two hours. The Prime Minister proceeded to travel by road after necessary confirmation of necessary security arrangements by the DGP Punjab Police.

Around 30 km away from the National Martyrs Memorial in Hussainiwala, when the Prime Minister's convoy reached a flyover, it was found that the road was blocked by some protestors. (ANI)

New Delhi: Evoked by the case filed by a section of medicos over Fee Fixation Committee order, the Supreme Court of India has intervened to curb capitation ..