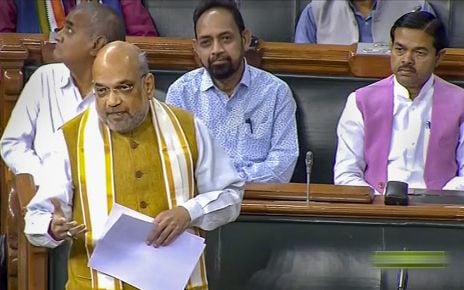 New Delhi: The government's intention to bring the Criminal Procedure (Identification) Bill is to strengthen the law and order and internal security of the country, Home Minister Amit Shah said on Monday, asserting that concerns over human and personal rights have been taken care of in the draft legislation.

The bill seeks to provide legal sanction to the police to take physical and biological samples of convicts as well as persons accused of crimes.

Moving the Criminal Procedure (Identification) Bill for consideration and passage in Lok Sabha, Shah said that besides the bill, the government under Prime Minister Narendra Modi is also preparing a model prison manual that will be send to states.

"A lot of the concerns will be addressed with the sending of that prison manual. It has various provisions relating to subjects such as rehabilitation of prisoners, making them part of the mainstream again, limiting the rights of jail officials, maintaining discipline, security of jails, separate jails for women and open jails," Shah said.

He urged the members to not see the bill in isolation but in consonance with the model prison manual that will be introduced later.

Noting that the bill would replace the Identification of Prisoners Act, 1920, Shah said that the current law has become irrelevant from various perspectives such as the prevailing situation, science, proving crime in courts and strengthening law enforcement agencies.

The bill will not only help in overcoming the problems being faced under the present law but also give strength to evidence gathering, he added.

Till the powers to prove crime in courts are not enhanced, in a way it will be impossible to maintain and strengthen the law and order situation and internal security of the country, the home minister said, adding that the change in the law is already much delayed.

He said that in 1980, the then law commission had also recommended revisiting the present law.

"After we came to power, we discussed with states and views have been sought on it," Shah said.

Noting that members expressed a lot of opposition at the time the bill was being introduced, Shah said concerns were expressed from the point of view of human and personal rights by them.

Their concerns are legitimate but these are already accounted for in this bill, he said.

"If we do not bring about the required changes in the law, we will lag behind in providing courts with the evidence to prove a crime, conviction rate will not increase and in a way help would not be provided in investigations," Shah said.

The intention of the government is to strengthen the law, to prove crime, isolate criminals and give them a chance to reform, he said.

"Our intention is to strengthen the internal security and law and order of the country," Shah said.

The government had last Monday introduced the bill in Lok Sabha amid uproar by the opposition which dubbed the measure as “illegal” and “unconstitutional”.