Tomar said farmer unions and the opposition have not been able to point out any lacuna in the three laws. 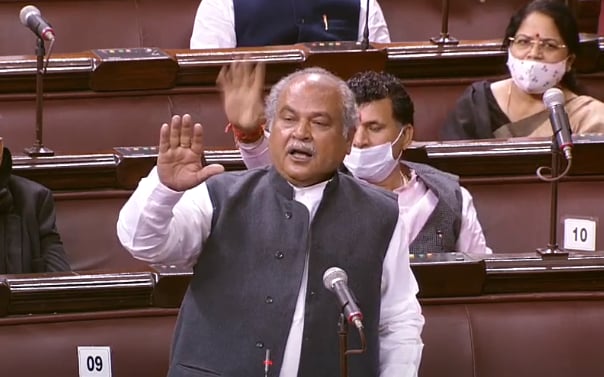 New Delhi: Putting up a strong defence of the new farm laws, Agriculture Minister Narendra Singh Tomar on Friday said the government's offer to amend them to assuage farmers' sentiments did not mean they had any flaws and that none from the protesting unions or their sympathisers have been able to point out any lacuna.

Countering the opposition claim that farmers across the country are agitated over the three new laws, he said that those in just one state are being misinformed and instigated.

His comments in Rajya Sabha referred to protests at the border points of the national capital being led by farmers from Punjab.

The government, he said, is committed to welfare of farmers and to the continuation of the mandi system of procurement of crops on minimum support price (MSP) based mechanism.

The laws give farmers alternatives to sell their produce outside 'mandis', and unlike the state government notified market places, such sale would not attract any tax.

"The agitation should have been against the tax levied (by state government) on sale made in mandis but strangely the protests are against freeing of the system from such taxes," he said, intervening during the discussion on a motion thanking the President for his address to the joint sitting of Lok Sabha and Rajya Sabha at the start of the Budget Session.

Tomar said farmer unions and the opposition have not been able to point out any lacuna in the three laws.

"Government's offer to make amendments in the laws does not mean there are any shortcomings in them," the minister added.