The report, Smuggling in India Report 2021, was released by the Union Finance Minister on Monday. 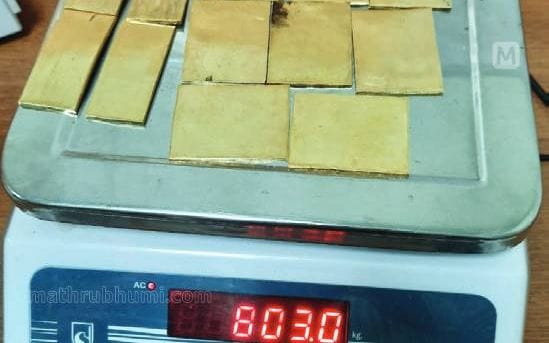 New Delhi: Gold smuggling in India is fuelled by the huge demand for gold combined with import duty on illicit import of gold. Besides being one of the major vehicles of money laundering in the country, smuggling of gold also leads to the growth of mafia groups in the country and is a heavy drain on the foreign exchange resources of the country, the directorate of revenue intelligence said in a report, released on Monday.

In the report -- Smuggling in India Report 2021 -- which was released by Union Finance Minister Nirmala Sitharaman on Monday, the government agency said it had always risen to the challenge and made great inroads into breaking the gold smuggling syndicates over the years.

The report said the quantum of import of gold into India was significantly high to meet the huge demand. India, the world's second-biggest gold consumer after China, imports about 900 million tonne (mt) of gold a year. Gold consumption in India was 797.3 mt in 2021, the highest in the past five years, according to the World Gold Council data.

India being a negligible producer of gold, the huge demand for gold in the country is met through imports, the agency said, adding that India imports gold dore bar as well as refined gold. In the last five years, imports of gold dore bars made up 30 per cent of the total official imports of the yellow metal in India.

Breaking through the web of syndicates, multiple carriers, unique modus operandi and novel ways of concealment, DRI has made seizures of 833 kg of smuggled gold during 2021-22, the agency said.

Although Switzerland is the biggest source of licit gold bullion entering India, historically gold has been smuggled from Middle East countries into India through air routes for a long time, the report said. However, the alertness of Indian law enforcement agencies has compelled the gold smuggling syndicates to adopt a new way of operating and strategies.

Increased surveillance at International airports has forced the change of route from the Middle East by air to land route which is through the China-Myanmar-India borders, according to the report. Geographically, India has land borders with five countries in the Northeastern region, namely Myanmar, Bangladesh, Bhutan, Nepal and China.

The geostrategic location and the presence of China and other Southeast Asian countries on either side has been crucial in effectively transforming Myanmar as the transit corridor for smuggling of gold into India, the government agency said in the report.

The investigation of the gold smuggling cases booked by DRI suggests that Myanmar has now emerged as one of the major transit points of gold being smuggled into India.

The trends of gold smuggling and seizure data show that 73 per cent of smuggled gold caught has been brought through Myanmar and Bangladesh. Many international reports suggested that smuggled gold is brought into Myanmar through China at Muse, one of the bordering cities on the Myanmar-China border.

According to the report, Gold enters Myanmar from China, primarily through the border towns of Ruili on the China side and Muse on the Myanmar side. Muse is located in the Shan State of North Eastern Myanmar and Ruili is located in Dehong Dai Prefecture of Yunnan Province. Ruili is also known as China's gateway to Myanmar.

The smuggled gold is then further transported from Muse through Mandalay-Kalewa route to places at the Indo-Myanmar Border (IMB), the report said, adding that India shares a long, densely forested, hilly and rather inaccessible border with Myanmar in the states of Manipur, Mizoram and Nagaland.

The DRI report said Manipur and Mizoram are the two strategic states at the Indo-Myanmar Border in connection with gold smuggling.

According to the report, the shift in gold route through the IMB may also be attributed to the crackdown on insurgency, leading to the well-established routes and network of carriers engaged in erstwhile arms smuggling being lured into the lucrative world of gold smuggling. Moreover, the existence of scattered defunct gold mines in Myanmar and possible unaccounted mining of gold at many locations favours the gold smuggling syndicate.