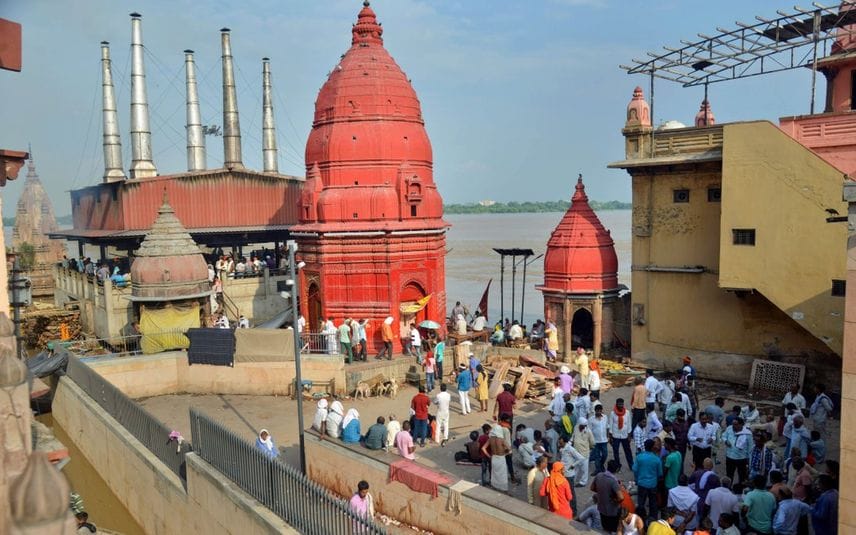 People gather for the cremation of their family member on the roof of the Manikarnika ghat, after waterlogging at the ghat due to the swollen Ganga river in the ongoing monsoon season. Photo: PTI

Varanasi:The rising water level of Ganga and Varuna rivers has submerged parts of Varanasi including its famous ghats, forcing the cremation of bodies brought to the Harishchandra and Manikarnika ghats in nearby streets and on terraces.

People affected due the flood have taken refuge in safer areas as the administration prepares to shift them to relief camps.

Taking a serious note of the problems faced by the people of his Parliamentary constituency, Prime Minister Narendra Modi directed officials to provide all possible help to people already in the relief camps.

Virendra Choubey, a resident of the Samne Ghat, said as soon as water started entering houses, he sent his family to his village, while he stayed back to take care of the house.

Chandrakant Singh, a resident of Hukulganj in Pandeypur, said more than 100 houses in Hukulganj and Naibasti areas are affected by the floods. There has been a lot of damage due to water entering the houses.

Area from the Assi Ghat to the Namo Ghat are completely submerged, forcing bodies coming for last rites at Harishchandra Ghat and Manikarnika Ghat to be be cremated either on the nearby streets or on terraces.

Due to the space constraint, there is a long queue for cremation.

According to the Central Water Commission, the water level of Ganga in Varanasi crossed the warning mark of 70.262 metre at 8 am Friday and stood at 70.86 metre, just 0.40 meters below the danger mark of 71.262 metre.

Following rise in the water level in the Ganga, the reverse flow has led to a similar situation in the Varuna river as its water has started entering the residential areas situated on its banks.

An officials said the district administration is fully prepared and the flood-affected people are being shifted to relief camps. Medical facilities are being provided to the displaced people in these camps along with food and drinking water, the official said.

The prime minister asked the officers to provide all possible help to the people living in the relief camps and directed to contact the PMO directly if needed, a statement said.

Commissioner Deepak Agrawal and District Magistrate Kaushal Raj Sharma inspected flood relief camps including those set up in Saraiya, Dhelwaria areas and directed the officials present on the spot not to let the flood-affected people living in relief camps face any kind of problem.

According to the district administration, a total of 40 flood relief camps will be set up in the district, out of which 11 are already functional.

A total of 1,290 people from 280 families were staying in the flood relief camps on Thursday, out of which 382 are below 12 years and 132 are elderly people.

Apart from making proper arrangements for food and water for the people living in the camp, arrangements have also been made for providing clean bedding, lighting, toilets, medical security etc.

Officers and employees of the different departments have been deployed in the camps.

Officials said 40 medical teams have been formed for relief camps in the district and fodder has been arranged for animals affected by the floods and veterinary officers have been deployed in relief camps. PTI