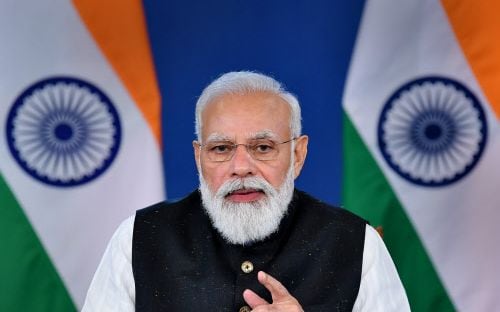 In a virtual G20 Extraordinary Summit on Afghanistan that was convened by Italy, "Prime Minister Narendra Modi underlined the need to ensure that Afghan territory does not become a source of radicalization and terrorism, regionally or globally," read the Prime Minister's Office statement.

He emphasized the need to enhance the joint fight against the nexus of radicalization, terrorism, and the smuggling of drugs and arms in the region.

"Participated in the G20 Summit on Afghanistan. Stressed on preventing Afghan territory from becoming the source of radicalisation and terrorism," tweeted PM Modi.

He also called for urgent and unhindered humanitarian assistance to Afghan citizens.

Issues under consideration at the meeting related to the humanitarian situation; concerns relating to terrorism; and human rights in Afghanistan.

In his remarks, the Prime Minister welcomed the initiative of the Italian G20 Presidency in convening the meeting to take stock of the current situation in Afghanistan.

He emphasized the centuries-old people-to-people ties between India and Afghanistan. PM Modi mentioned that over the last two decades, India has contributed to promoting socio-economic development and capacity building of youth and women in Afghanistan. He recalled that over 500 development projects have been implemented by India in Afghanistan, added the statement.

The Prime Minister noted that the Afghan people have a great feeling of friendship with India. He conveyed that every Indian feels the pain of Afghan people facing hunger and malnutrition. He emphasized the need for the international community to ensure that Afghanistan has immediate and unhindered access to humanitarian assistance.

In order to preserve the socio-economic gains of the last 20 years and to restrict the spread of radical ideology, the Prime Minister called for an inclusive administration in Afghanistan, which includes women and minorities, added PMO statement.

PM Modi further conveyed support for the important role of the United Nations in Afghanistan and called for renewed support of the G20 for the message contained in UN Security Council Resolution 2593 on Afghanistan.

Resolution 2593 was passed by the UNSC under the presidency of India on August 30, 2021, with Russia and China abstaining from voting.

This resolution demands that Afghan territory should not be used to threaten or attack any country or to finance terrorist acts.

He also called on the international community to forge a unified international response without which it would be difficult to bring about the desired change in Afghanistan's situation, added the statement.