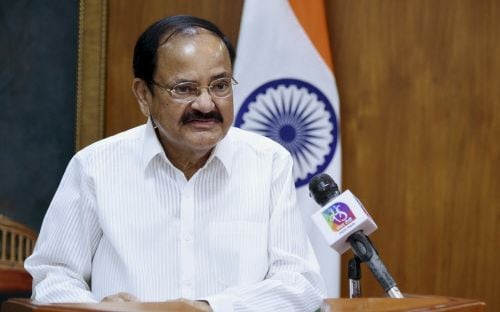 New Delhi: A fiery orator since his younger days, Muppavarapu Venkaiah Naidu started public life as a teenager with the ABVP after hearing then Jan Sangh leader Atal Bihari Vajpayee at a public meeting in the late 1960s, but the legend has it that he joined an RSS 'shakha' as a 14-year-old just for the game of 'kabaddi'.

From pasting party posters to evolving as an epitome of political and ideological loyalty who became one of the BJP's most visible leaders and later India's vice president, Naidu came a long way.

He entered into student politics through the ABVP and played an active role in the JP movement.

On Saturday, Naidu joined the ranks of vice presidents who did not get a second term. So far, only S Radhakrishnan and Hamid Ansari have occupied the post for two consecutive terms.

Born in a humble agricultural family in Andhra Pradesh's Nellore district, 72-year-old Naidu has served as a BJP president, a union minister and a long-time Rajya Sabha member.

Even though he never represented Lok Sabha, Naidu served two terms as a member of the Andhra Pradesh legislative assembly, before moving to national politics.

He successfully contested his first assembly election in united Andhra Pradesh in 1978.

Known for his oratory skills, Naidu often uses interesting one-liners and rhyming phrases to put across his views effectively.

Not many know that Naidu translated former prime minister Atal Bihari Vajpayee's speeches for his audience down south.

Naidu, who has a liking for non-vegetarian food, was always skeptical if he would be accepted in the saffron outfit. He had once said the first question he asked the party leadership before joining it was whether he would be allowed to have non-vegetarian food. The party had made it clear it had no problem with his food habits as it was his personal choice.

Once an Advani protege, Naidu vigorously backed Modi for the prime minister's post before the 2014 elections. He has also served as a Union minister holding various portfolios.

The veteran leader also served as the BJP national president from July 2002 to October 2004 for two consecutive terms. He quit the post after the party's defeat in the 2004 Lok Sabha elections.

As Rajya Sabha chairman, Naidu had to deal with difficult situations on various occasions, including protests in the House by opposition members on issues such as the now-repealed three farm laws.

"A proper vision is possible with two eyes," Naidu had once said to emphasise he held both the sides in parliament in equal esteem.

He had said it was the collective responsibility of both the sides to enable smooth functioning of the House.