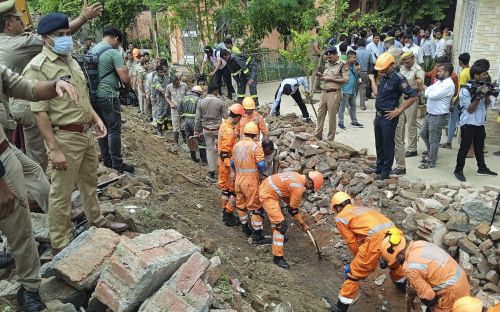 National Disaster Response Force (NDRF) personnel during a rescue operation after a portion of a boundary wall of a housing society collapsed, at Jal Vayu Vihar in Noida, Tuesday, Sept. 20, 2022. At least four people were killed in the mishap | Photo: PTI

All 12 who had been buried under the rubble while repairing a drain adjoining it at Jal Vayu Vihar in Sector 21 around 10 am were labourers, the officials said.

A team of Sector 20 police station later arrested a sub-contractor, Gul Mohammad, who supplied labourers for the job, while his associate contractor Sundar Yadav is absconding, a police official said.

Both have been charged with negligence leading to deaths after some workers claimed they had cautioned the contractors about the weak structure but were told to continue work, the officials said.

UP industrial development minister Nand Gopal Gupta condoled the loss of lives and said a committee has been formed to investigate the matter and it will submit its report in 15 days after which strict action would be taken against whoever is found guilty of negligence.

Multiple earth-moving machines were deployed to clear the debris of the wall that was located adjacent to a drain.

"A total of 12 labourers were pulled out of the rubble. Four of them died while others suffered injuries in the episode," Additional Deputy Commissioner of Police (Noida) Ashutosh Dwivedi told PTI.

The dead have been identified as Pushpendra Singh (25), Panna Lal (25) and Amit (18), all from Budaun district in Uttar Pradesh, and Dharam Veer (18) from Sambhal district, police said.

One of the injured, Pappu Singh (25) of Budaun, is undergoing treatment at the district hospital, they added.

The youngest among the dead was Amit, who wanted to join the Army and was preparing for the next recruitment process while pursuing his college education and also working as a labourer.

Amit's uncle Vinod, who was also present at the spot, said he was his family's sole breadwinner.

"Amit's father is a farmer and his mother a housewife. He enrolled himself in a bachelor's programme in Ujhani area in the Badaun district of Uttar Pradesh two days ago and came here for work," Vinod said.

Sanjeev Kumar (28), a native of Badaun, said they were working at the site since September 15.

"We started work around 9 am today and after sometime, noticed that the boundary wall was unstable. We immediately informed the sub-contractor about the condition of the wall who asked us to continue the work. He said that if anything happens, he will be responsible for it," Kumar said.

Kumar sustained an injury in his leg and was discharged from the hospital after getting treatment.

Later in the day, Prime Minister Narendra Modi after virtually inaugurating an all-India conference of mayors of BJP-ruled cities made a general observation, saying the collapse of old buildings, and buildings catching fire in cities is a major concern. This can be avoided if rules are followed, he said making the general observation.

Noida Authority CEO Ritu Maheshwari said, "The Jal Vayu Vihar society is an old-constructed society. The boundary wall was also constructed by the society itself and looked weak."

The work on the drain outside the society was being carried out on its request by a Noida Authority contractor through a tender, she said.

"The labourers repairing the drain came under the wall which suddenly collapsed. There were 12-13 people at the spot. Of those rescued, one is injured and the remaining are fine," Maheshwari said.

On the contractor being cautioned by locals that the boundary wall was weak, the Noida Authority CEO said the matter will be investigated.

"A joint investigation by police, district administration and Noida Authority will be carried out and if negligence is found on anyone's part then action will be taken against them. "The contractor was working on the drain and not the boundary wall," she said.

"He directed senior officials to rush to the spot and conduct relief work on a war footing," his office said in a tweet in Hindi.

Noida MLA and BJP leader Pankaj Singh called for action against those guilty of negligence in the episode and assured support to the families of the victims.

Charges under the law prohibiting child labour were also invoked against the contractor and the sub-contractor, Dwivedi said, adding Mohammad has been arrested while efforts were on to nab Yadav soon.

Speculation of SP-BSP tie-up as Mayawati slams UP govt for not allowing ...

Anybody can contest; Cong president poll will be free and fair, transparent: ...