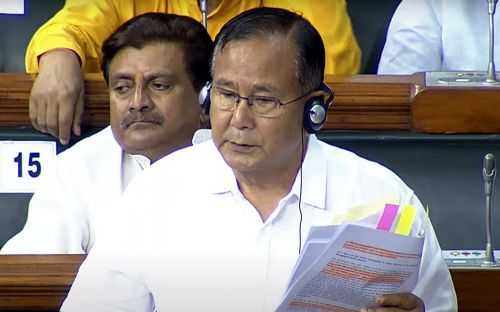 New Delhi: Amid a political uproar over the gold smuggling case in Kerala, the Centre on Friday said the state government has not sought its permission to seek help of UAE diplomats for sending baggage belonging to state executives.

In a written reply to a question in Lok Sabha, Minister of State for External Affairs Rajkumar Ranjan Singh said that as per existing instructions of the Indian government, foreign missions are required to conduct all official business with the state governments through the Ministry of External Affairs.

"No programme may be arranged or calls on dignitaries fixed by the state governments for foreign diplomats, including Heads of Missions, unless cleared by the Ministry of External Affairs," Singh said.

This is an essential protocol requirement to ensure that foreign missions observe proper procedures, he said in response to a query from Revolutionary Socialist Party leader N K Premachandran.

When asked whether the state government has sought permission from the Centre to meet diplomats from a foreign country during their visit to the state, the minister said "no".

The responses from the Union minister come against the backdrop of the ruling LDF in Kerala facing heat over the gold and dollar smuggling cases allegedly involving some top bureaucrats in the Kerala government and officials of the UAE consulate in Thiruvananthapuram.

Swapna Suresh, a former employee of the UAE Consulate in Kerala and a key accused in the case of smuggling gold through diplomatic channels, had recently levelled serious allegations against Kerala Chief Minister Pinarayi Vijayan and his family in the smuggling case, charges which have been vehemently denied by the ruling front.

Vijayan is leading the Left Democratic Front (LDF) which swept to power for the second consecutive time last year.

The case mainly relates to the seizure of 30 kg of gold on July 5, 2020 from a diplomatic baggage at the air cargo of the Trivandrum International Airport by the customs department. The consignment was found camouflaged in diplomatic baggage from the UAE.

Under the Vienna Convention, diplomatic baggages are exempted from inspection at airports.

In a statement before a magistrate in Kochi under Section 164 of the CrPC last month, Suresh had accused the chief minister, some of his family members and top bureaucrats of being involved in various smuggling activities.

The Customs (Preventive) Commissionerate, which probed the gold smuggling case, had filed the statement before the high court on March 5, 2021, containing Suresh's "shocking revelations" against the chief minister, then Assembly Speaker P Sreeramakrishnan and some ministers in Vijayan's earlier Cabinet with regard to dollar 'smuggling' involving UAE consulate officials in Thiruvananthapuram.

The dollar case relates to alleged smuggling of USD 1,90,000 (equivalent to Rs 1.30 crore) by a former finance head of the UAE Consulate in Thiruvananthapuram to Muscat in Oman.

Besides the Customs, the gold and dollar smuggling cases, which have created a huge political uproar in Kerala, are being probed by the National Investigation Agency (NIA) as well as the Enforcement Directorate (ED).