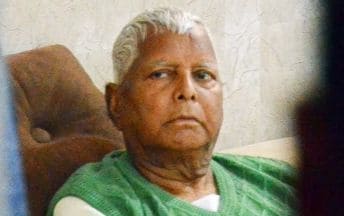 The quantum of punishment will be pronounced on February 18, a CBI counsel said.

The court had on January 29 completed hearing arguments in case and reserved its verdict. Prasad had earlier been sentenced to 14 years in jail in four other fodder scam cases.

"Lalu Prasad has been convicted. The quantum of punishment will be pronounced on February 18," the CBI counsel said.

The court of Special CBI (Central Bureau of Investigation) Judge S K Shashi had completed the hearing against 99 accused including Prasad, which was underway since February last year.

Arguments on behalf of the last accused, Dr Shailendra Kumar, were completed on January 29. All the accused had been ordered to be physically present in the court on the day of the verdict.

Of the original 170 accused in the case, 55 have died, seven have become government witnesses, two have accepted the charges against them and six are absconding.

The Rs 950-crore scam relates to fraudulent withdrawal of public funds from government treasuries in various districts of undivided Bihar.

The RJD supremo, who has been sentenced to 14 years in prison and slapped with a total fine of Rs 60 lakh, has secured bail in the four cases related to Dumka, Deoghar and Chaibasa treasuries.

The fodder scam came to light in January 1996 after a raid at the Animal Husbandry Department. The CBI named Prasad as an accused in June 1997. The agency framed charges against Prasad and former Bihar chief minister Jagannath Mishra.

In September 2013, the trial court convicted Prasad, Mishra and 45 others in one of the cases related to the fodder scam and Prasad was imprisoned in Ranchi jail.

In December 2013, Supreme Court granted bail to Prasad in the case while in December 2017, CBI court found him and 15 others guilty and sent them to Birsa Munda prison.