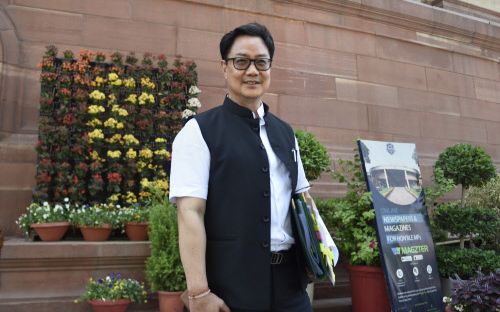 The "fittest" persons should be appointed as judges and not someone whom the collegium knows, he said.

The Union minister was speaking on `Reforming Judiciary' at the India Today conclave here.

"I am not critical of the judiciary or the judges...I am not happy with the present system of the Supreme Court collegium. No system is perfect. We have to always strive and work towards a better system," the minister said.

The system has to be accountable and transparent, he said, adding, "If it is opaque, then who else will speak up against it if not the concerned minister."

He was only "reflecting the thinking" of the people including the lawyer community and even some judges, he said.

"The basic fault with the present collegium system is that the judges are recommending those colleagues whom they know. Obviously, they would not recommend a judge they do not know," Rijiju said.

"The fittest should be appointed and not someone whom the collegium knows," the minister said.

Asked how the process would be different if the government were to be involved, Rijiju said the government has an independent mechanism to collect information and carry out due diligence.

"The government has the intelligence bureau and several other reports to rely on before taking a decision. The judiciary or the judges do not have this," he said.

Across the world, governments appoint judges, the law minister said.

"There is politics in the judiciary too because of this. They (judges) may not show it but there is intense politics," Rijiju said.

"Should the judges be stuck in such administrative work or spend more time in dispensing justice," he asked.

On the Supreme Court rejecting the National Judicial Appointments Commission Act, Rijiju said the government had not said anything on it so far.

"When it was struck down, the government could have done something...but it did not as it respects the judiciary. But that does not mean we will keep quiet always," he said.

The Narendra Modi government believes in the independence of the judiciary and hence it did not take any step undermining it, he said.

"But the judiciary should not get into the role of the Executive. When judges make oral comments, it gets wide coverage even though such comments have no bearing (on the case) whatsoever. A judge should speak through his or her order instead of making unnecessary comments and inviting criticism," Rijiju said.

Lamenting the large number of cases which get filed in courts across the country, Rijiju said most of the cases could be settled outside the courts.

"We are introducing the mediation bill and I am hopeful it will be cleared in the upcoming winter session. A large number of cases can be settled through mediation," he said.

To make the courts accessible to more and more people, lawyers should be allowed to argue in the language they are comfortable in, the law minister said.

"We have the technology to translate. This should be used," he said.

He was very upset when the Supreme Court "struck down" the sedition law despite the government assuring that it was reviewing the law, Rijiju said.

"When the government has already said that the law and its provisions were old and hence we were taking a review of it, the Supreme Court struck it down. That is when I said everyone has a Lakshman Rekha that they should not cross," Rijiju said.

The Supreme Court in May this year suspended pending criminal trials and court proceedings under Section 124A (sedition) of the Indian Penal Code. PTI