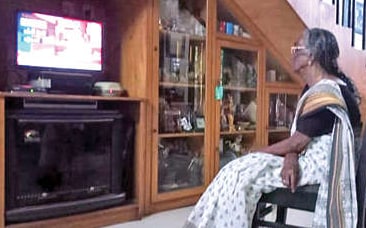 New Delhi: Former athlete PT Usha on Wednesday took oath as a Rajya Sabha member. She took oath in Hindi. Prime Minister Narendra Modi met PT Usha in Parliament after the ceremony. The first request put forward by Usha during her meeting with the PM was to have AIIMS in Kerala, the state’s long-standing wish. She requested that AIIMS at Kinalur in Balussery soon turn into a reality. The PM instructed MoS V Muraleedharan to remind him about the matter.

Usha was accompanied by her husband V Sreenivasan and son Vignesh Ujjwal. She also met Vice President and chairman of the Rajya Sabha M Venkaiah Naidu.

Usha’s mother Lakshmi and uncle Narayanan watched the ceremony on TV from the hall of their home ‘Ushass’ in Payyoli.

She was nominated to the Upper House by the government on July 6 along with music composer Ilaiyaraaja, philanthropist Veerendra Heggade and film director K.V. Vijayendra Prasad.

Usha, a celebrated athlete born in a small village in Kozhikode district in Kerala, is one of India's most iconic sportspersons. She has been a role model and inspiration for lakhs of young girls across the country who have dreamt of taking up a career in sports, especially track and field events.