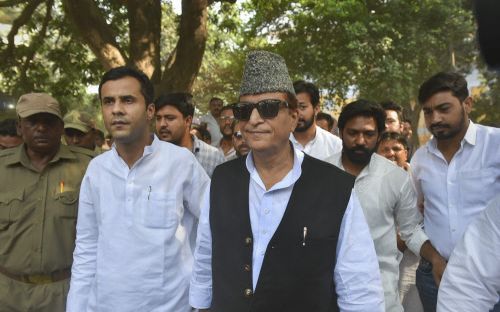 Noida: Samajwadi Party's Azam Khan and Nahid Hasan, both of whom contested the 2022 Uttar Pradesh assembly elections while being jailed, have won from their respective seats, official results showed.

Khan, a former Uttar Pradesh cabinet minister and nine-term MLA, registered victory against nearest rival Akash Saxena (Honey) of the BJP from Rampur seat by a margin of over 55,000 votes, the Election Commission website showed.

He is currently lodged in the Sitapur jail over multiple charges including theft, criminal intimidation and land encroachment.

Total nine candidates were in the fray from Rampur assembly seat in the 2022 state polls.

In Shamli district's Kairana, the SP's Nahid Hasan logged his third assembly poll win after he defeated the BJP's Mriganka Singh by over 25,000 votes, the EC website showed.

Hasan was arrested on January 16 this year in connection with a 2021 case at the Kairana Kotwali under the UP Gangsters and Anti-Social Activities (Prevention) Act and has been in jail since then.

The BJP has retained power in Uttar Pradesh after the 2022 assembly polls, winning a majority of the 403 seats in the state and is set to continue with its Yogi Adityanath-led government once again.