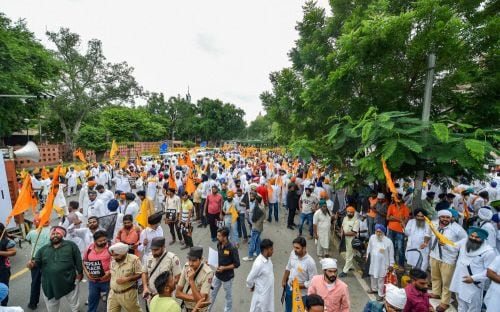 New Delhi: With Shiromani Akali Dal (SAD) threatening to hold a protest march in Delhi to observe 'black day' on completion of one year of three farm laws, the borders of the national capital have been sealed.

Earlier in the day, Delhi traffic police, in a tweet, informed that the Jharoda Kalan border has been closed by barricading both the roads due to the farmers' movement and suggested people to refrain from using that route.

The road from Sardar Patel Marg to Dhaula Kuan has also been closed for traffic in view of the farmers' movement.

General Secretary Prem Singh Chandumajra on Thursday had informed that their party will hold a protest march from Gurudwara Rakabganj to Parliament in Delhi and will demand repealing of the three farm laws.

In the wake of the ongoing Covid-19 pandemic, Delhi Police issued a notice to SAD president Sukhbir Singh Badal and spokesperson Daljit Singh Cheema stating that the protest march will not be allowed in the national capital.

SAD workers protesting at Shankar Road condemned this step of police and said it is against democracy to prohibit people from holding peaceful protests.

"The three farm laws are against the interests of farmers and will only benefit the capitalists. This government is run by corporates," alleged a SAD worker.

"We have travelled a long distance from Punjab to participate in this protest. But the police is not even allowing us to visit the gurdwara. The way they pushed our people and carried them to cars is condemnable," he added.

Meanwhile, Badal has reached Rakabganj gurdwara and the police have tightened security as the SAD workers gathered in large numbers outside the gurdwara to protest against three farm laws.

Farmers have been protesting since November 26 last year against the three newly enacted farm laws: Farmers' Produce Trade and Commerce (Promotion and Facilitation) Act, 2020; the Farmers Empowerment and Protection) Agreement on Price Assurance and farm Services Act 2020 and the Essential Commodities (Amendment) Act, 2020.

Farmer leaders and the Centre have held several rounds of talks but the impasse remains.

One year of farmers' protest