A bench of Justices Sanjay Kishan Kaul and M M Sundresh said, "The redressal of problems can be through judicial forum, agitation or through Parliamentary debates. But how can the highways be blocked and this is happening perpetually. Where does this end?” 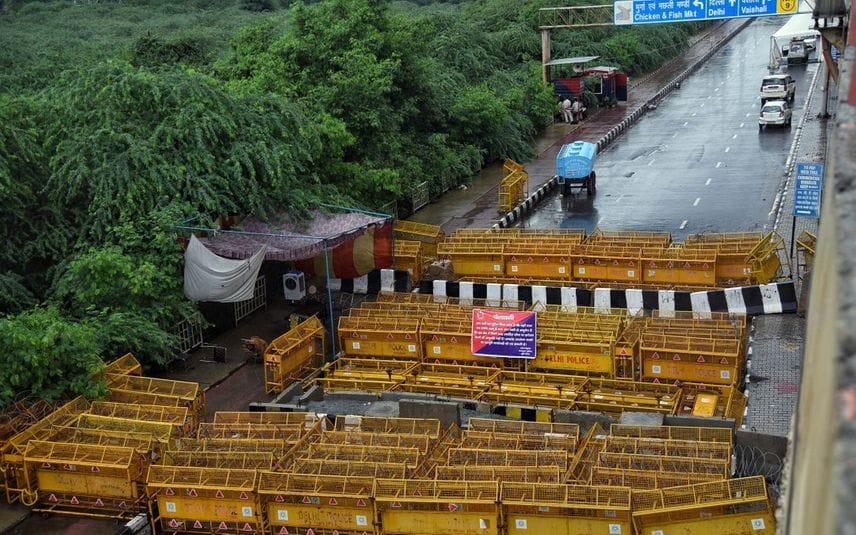 New Delhi: How can highways be blocked perpetually, the Supreme Court wondered on Thursday while referring to road blockades by farmers protesting at Delhi borders against the three farm laws passed last year, and said it is the executive's duty to implement the law laid down by the court.

The top court allowed the Centre to file a formal application to make farmer unions party to the plea seeking opening of road blockade at Delhi-Uttar Pradesh border at UP Gate here.

A bench of Justices Sanjay Kishan Kaul and M M Sundresh said, "The redressal of problems can be through judicial forum, agitation or through Parliamentary debates. But how can the highways be blocked and this is happening perpetually. Where does this end?”

The top court was hearing a plea of a NOIDA resident Monicca Agrawaal, who has sought removal of blockade saying that earlier it took 20 minutes to reach Delhi and now it is taking over two hours and people of the area are facing hardships due to protests at the UP Gate on Delhi border.

At the outset, the bench asked Additional Solicitor General K M Nataraj what is the government doing in the matter.

Nataraj said that they had convened a meeting with the protesting farmers and details have been mentioned in the affidavit.

Solicitor General Tushar Mehta said that it is the duty of the executive to implement it.

The bench said, “When we lay down the law, you will say it is encroachment and we trespassed into the domain of the executive. This has ramifications but there are also grievances which need to be addressed. This cannot be a perpetual problem”.

Mehta said that when it is invited then it will not be encroached upon.

He said that at the highest level a three-member committee was formed to address the grievances but the farmers' representatives who were invited refused to join in the discussions.

Mehta said the court should allow the petitioner to make the farmers union party to the petition, so that later they don't say that they were not made parties in the matter.

The bench told Mehta that it is he who will have to move an application for making farmers representative party as the petitioner, a private individual may not know who their leaders are.

“If you feel that someone is to be made party, you will have to make a request. You move a formal application giving details about the steps taken to resolve their grievances and how the impleadment of representatives of farmers will help in the resolution of the dispute”, the bench said, while listing the plea for hearing on October 4.

Mehta said that they will file the application by Friday.

On August 23, the top court had said that the Centre and Delhi's neighbouring states should find a solution to road blockades on the national capital's borders due to farmers' protest.

It had told the Centre why the government can't find a solution to this problem as though farmers have the right to protest but at the designated places and due to the protests, inflow and outflow of traffic cannot be disrupted.

The top court had said that this will have an impact on toll collection as well because vehicles will not be able to pass through due to the blockades.

It had then ordered, “Solution lies in the hands of the Union of India and the concerned state governments. They have to coordinate to find a solution that when a protest takes place, roads are not blocked and traffic is not disrupted to cause inconvenience to the common people”.

The Solicitor General had said that if the court is willing to pass some orders then two farmers unions can be made parties and he can give their names.

The top court had said that tomorrow another two unions will come forward and say they represent the farmers and this will go on.

On March 26, the top court had issued notice to Uttar Pradesh and Haryana on the plea.

The Uttar Pradesh government has said in its affidavit that continuous efforts are being made to remove the blockade at the Delhi-UP border and there at present about 141 tents and 31 ‘langars' around the area, and the protestors have installed a platform on the flyover from where the leaders give speeches, a media house has also been made below the flyover.

Similarly, the Haryana government also told the top court that protesters staging 'dharna' at Singhu border have been camping on about 6 kilometres stretch of lanes of NH-44 since November 27, last year.

Initially, the protests started from Punjab in November last year and later spread to Delhi, Haryana and Uttar Pradesh and some other parts of the country. PTI