Later in the day, a crucial meeting of the Samkyukt Kisan Morcha, an umbrella body of around 40 farmer organisations leading the protests at several Delhi border points, will be held. 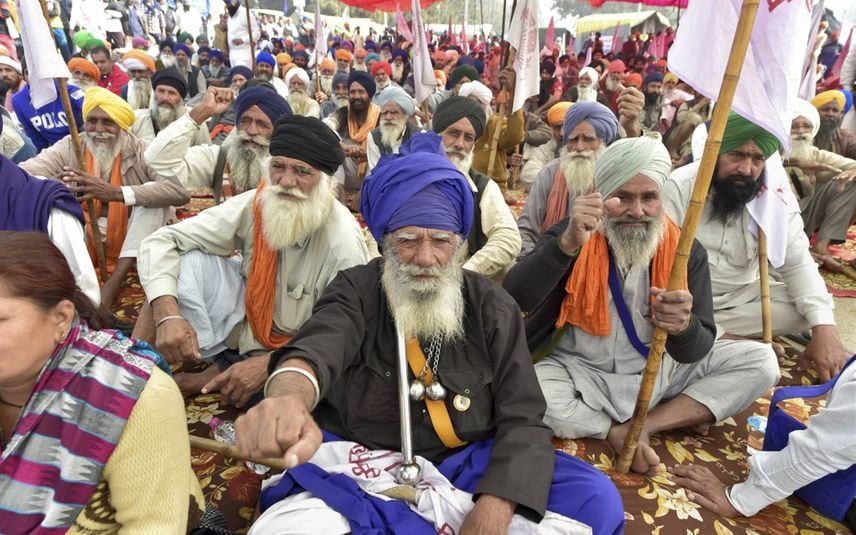 New Delhi: A meeting of 32 Punjab farmer unions opposed to the Centre's farm laws is underway at the Singhu border here, a major protest site, to reconsider the government's proposal to put the contentious legislations on hold.

This comes a day after the government asked farmer leaders to revert by Saturday in case they agree to its proposal to suspend the legislations for 18 months.

Later in the day, a crucial meeting of the Samkyukt Kisan Morcha, an umbrella body of around 40 farmer organisations leading the protests at several Delhi border points, will be held.

"The meeting of Punjab farmer unions is going on. A meeting of Samyukta Kisan Morcha will be held later in the day," said Lakhbir Singh, vice president (Punjab) of All India Kisan Sabha.

Unlike the last 10 rounds of talks between the government and farmer leaders, the 11th round on Friday saw both sides hardening their positions. They could not even reach a decision on the next date for the meeting.

The government asked farmer unions to revert by Saturday in case they agree to the suspension proposal and the talks can continue only thereafter.

This followed a big climbdown made by the Centre in the last round of talks on Wednesday when it offered to suspend the laws for 1-1.5 years and form a joint committee to find solutions, in return for protesting farmers going back to their respective homes from Delhi borders.

Farmer leaders, however, said they would settle for nothing less than a complete repeal of the laws, enacted in September last year, which they find pro-corporate, and a legal guarantee for the procurement of crops at government-fixed MSP (minimum support price).

They also said their tractor parade will go ahead as per the plans on January 26 and unions have told the police that it is the government's responsibility to maintain peace.

The farmer unions are adamant on taking out their tractor parade on Delhi's busy Outer Ring Road on January 26, even as the Delhi Police urged them to hold it outside the national capital, a request that was publicly rejected by the unions.

A meeting between a group of farm leaders and police officers from Delhi, Haryana and Uttar Pradesh is scheduled later on Saturday to discuss alternative routes for the tractor parade.

Talking to reporters after the meeting on Friday, Union Agriculture Minister Narendra Singh Tomar said the government has always maintained a sensitive approach towards farmers and their interest, but some forces were definitely at works to keep the agitation on and those forces certainly do not want farmers to benefit.

"No resolution is possible when the sanctity of an agitation is lost," he had said while adding that no decision can be reached in the interest of the farmers if vested interests get an upper hand.

Thousands of farmers, mostly from Punjab, Haryana and western Uttar Pradesh, have been camping at several Delhi border points since November 28 last year, demanding a repeal of three farm laws and a legal guarantee on MSP for their crops.

Enacted in September last year, the three laws have been projected by the Centre as major reforms in the agriculture sector that will remove middlemen and allow farmers to sell their produce anywhere in the country.

However, the protesting farmers have expressed their apprehension that the new laws would pave the way for eliminating the safety cushion of MSP and do away with the 'mandi' (wholesale market) system, leaving them at the mercy of big corporates. PTI