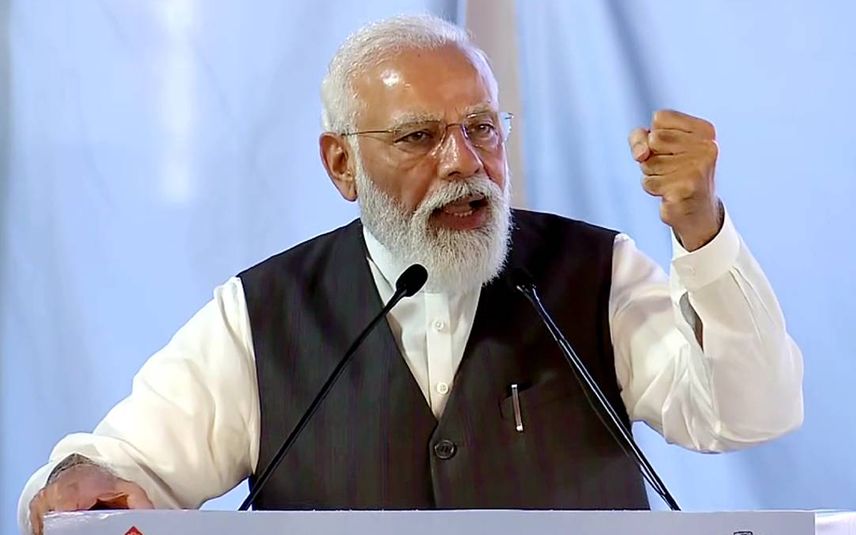 New Delhi: Prime Minister Narendra Modi on Wednesday said that the three farm laws over which farmers agitated on the borders of Delhi for almost a year were brought by the central government for the benefit of farmers and have now been withdrawn in the interests of the country.

"I have said this earlier also that farm laws were brought in for the benefit of farmers, but have now been withdrawn in the interest of the nation. I don't think this needs to be explained anymore. Future events will make it clear why these steps were necessary," said PM Modi.

Prime Minister said he has always worked for the benefit of farmers and they always supported him.

"I am someone who is on a journey to win the hearts of farmers. I understand the pain of farmers with marginal landholdings. I have always tried to win their hearts," he said.

"I have won the hearts of farmers from across the country and they have always supported me," he added.

On being asked whether the government is open to dialogue with farmers over the farm bills, PM Modi said that dialogue and discussion are the basis of democracy.

"In a democracy, it is the primary duty of public representatives to engage in dialogue with the people of the country. Our government has always engaged in these discussions and we are not in favour of stopping them," PM Modi said.

Stressing the importance of talks with stakeholders while drafting policies, PM Modi said that he believes that the common citizen of this country holds a wealth of knowledge and the government wants to work on feedback received from them.

"Discussions should never stop on any issue. I believe people should hear my opinion and the opinion of my government and talks should always go on. Just like we hold a discussion on the budget before formulating it. We do not believe that all the knowledge in the world is possessed by 'Gyan Babus' and politicians," he added.

Both the houses of Parliament passed the three farm laws on September 2020. The three laws enacted were Farmers' Produce Trade and Commerce (Promotion and Facilitation) Act, 2020; the Farmers Empowerment and Protection) Agreement on Price Assurance and Farm Services Act 2020 and the Essential Commodities (Amendment) Act, 2020.

Farmers, mainly from Punjab and Haryana, started protesting against the laws on the Delhi border from November 2020.

Several rounds of talks were held between farmers' leaders and the central government.

On November 19 2021, Prime Minister Modi announced that the Centre will roll back the farm laws.

After the Prime Minister's announcement, Samyukta Kisan Morcha, an umbrella organisation under which many farm unions were protesting against the laws, on December 9, 2021 announced the suspension of their year-long agitation.

The laws were repealed after the requisite bills were passed during the winter session of Parliament which began on November 23, 2021. (ANI)