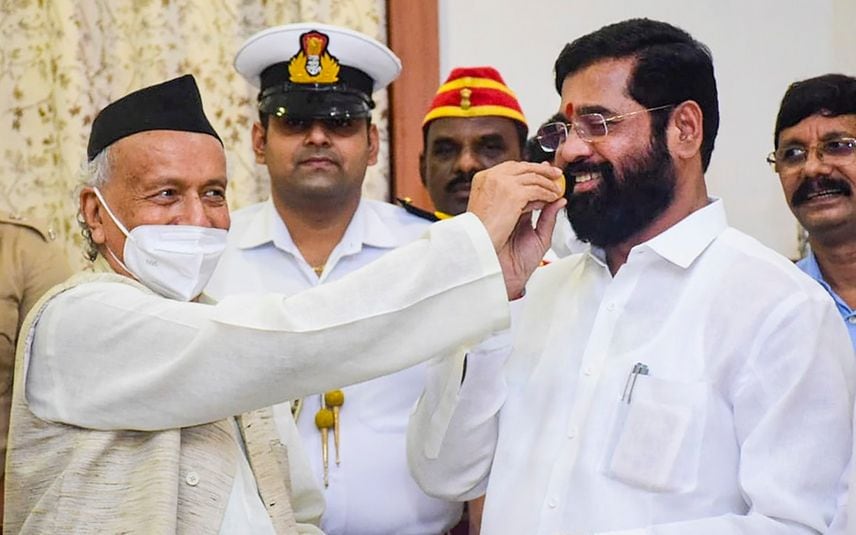 Maharashtra Governor Bhagat Singh Koshyari offers sweets to rebel Shiv Sena leader Eknath Shinde as he along with BJP leaders and other supporting MLAs meets the former regarding formation of the government in the state, in Mumbai. Photo: PTI

Mumbai:Springing a surprise, BJP leader Devendra Fadnavis on Thursday announced that rebel Shiv Sena leader Eknath Shinde will be the next Chief Minister of Maharashtra. Fadnavis's announcement defied expectations that he would return as chief minister with the support of the Shinde faction.

Shinde alone will take oath of office at 7.30 pm, and cabinet expansion will take place later, Fadnavis said at a press conference at Raj Bhavan premises after meeting Governor Bhagat Singh Koshyari along with Shinde.

"I will not betray the faith Fadnavis has placed in me," Shinde told the media.

The BJP will extend support to Shinde's group, said Fadnavis, a former chief minister and currently leader of opposition in the Assembly. BJP is the single largest party in the legislature. "I will be out of government but will ensure smooth functioning of the government which is coming as an alternative after Uddhav Thackeray resigned," Fadnavis said.

Sena (rebels) as well as BJP MLAs and some independents will be sworn in as ministers during the expansion, he added. This was not a battle for power but for principles and Hindutva ideology, he said, adding that the BJP was against imposing elections on the state at this juncture. There was unrest in the Shiv Sena ranks as alliance with Congress and NCP was insult of the mandate of the 2019 Assembly polls when Sena and BJP had fought the polls together, he said. "Uddhav Thackeray aligned with parties (Congress and NCP) whom (Sena founder) Bal Thackeray opposed all his life," Fadnavis claimed.

The Maha Vikas Aghadi alliance was "corrupt" and two ministers of that government are in jail for corruption and money laundering charges, the BJP leader said. Shiv Sena MLAs were facing problems in their constituencies as the MVA allies were hurting their prospects, Fadnavis said. Congress and NCP leaders in the constituencies of Shiv Sena leaders were being given government funds, he claimed.

Speaking later, Eknath Shinde, MLA from Kopri-Panchpakhadi in Thane city, said he took the decision (to rebel against the MVA government) with support of 50 MLAs for the development of the state and "there was no personal interest involved." "There were limitations to the functioning of the MVA," he said.

Shinde, who was a senior minister in the Thackeray government, lauded Fadnavis for giving up the opportunity to become CM, saying the BJP leader showed large-heartedness in making "Balasaheb Thackeray's Shiv Sainik" the next CM. When 50 MLAs take a decision, it calls for introspection, he said, without naming Uddhav Thackeray.