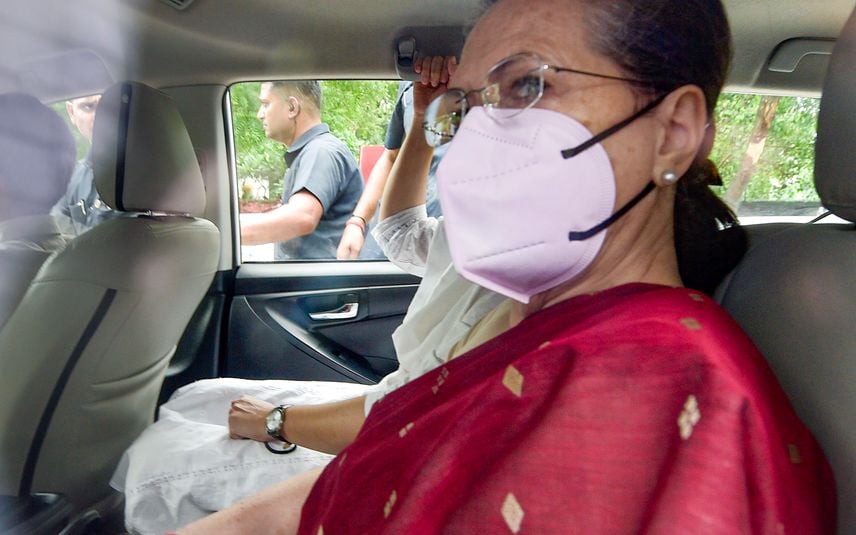 New Delhi: Congress president Sonia Gandhi on Wednesday recorded her statement for the third time before the Enforcement Directorate (ED) in the money laundering case linked to the National Herald newspaper.

She reached the federal agency's office in central Delhi at 11 am accompanied by her children Priyanka Gandhi Vadra and Rahul Gandhi.

The session began around 11:15 am by a team of investigators that includes the main probe officer and a person who takes down statements dictated by Gandhi on a computer.

Priyanka Gandhi is staying back at the 'Pravartan Bhawan' ED headquarters in order to provide any assistance or medical care to her mother like the earlier times.

The 75-year old Gandhi has been questioned for over eight hours during the last two appearances, where she faced close to 65-70 questions.

The questioning is expected to end Wednesday with the agency putting across a set of another 30-40 questions to Gandhi.

The questioning pertains to the charge of alleged financial irregularities in the Congress-promoted Young Indian Private Limited, which owns the National Herald newspaper.

The sessions are taking place with Covid-appropriate protocols in place and are being recorded in a audio-video mode, officials said.

The Congress has slammed the agency's action against its top leadership and termed it as "political vendetta" and "harassment".

The Delhi Police, like the last two times, deployed a huge force, including CRPF and RAF personnel, and barricaded the entire over one kilometre stretch between Gandhi's residence on Janpath-Akbar Road and the ED office. Traffic restrictions were also imposed in the area.

Rahul Gandhi has also been questioned by the ED in this case last month in sessions that clocked over 50 hours over five days.

In February last year, the Delhi High Court issued a notice to the Gandhis seeking their response on Swamy's plea. Congress leaders Mallikarjun Kharge and Pawan Bansal were questioned by the ED in the case in April.