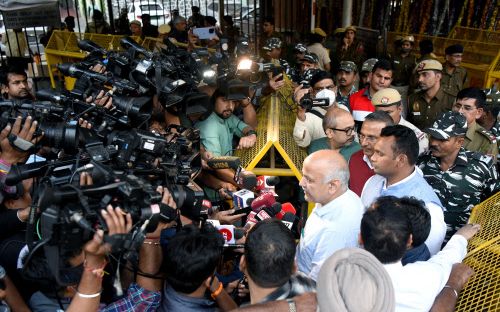 Delhi Deputy Chief Minister Manish Sisodia speaks to the media after visiting the Election Commission office over the alleged disappearance of AAP candidate from Gujarat, Kanchan Jariwala, and his family ahead of the upcoming Gujarat Assembly Election, in New Delhi on Wednesday | Photo: ANI

New Delhi: The Election Commission on Wednesday asked the Gujarat chief electoral officer to inquire and take action "as warranted" after the Aam Aadmi Party alleged that its Surat (East) candidate was abducted and coerced by the BJP to withdraw from the poll fray.

A four-member delegation of AAP led by Delhi Deputy Chief Minister Manish Sisodia met the Commission officials this evening and handed over a representation after holding a protest outside the EC office here.

The BJP rejected the allegations with Union Minister Anurag Thakur accusing the Arvind Kejriwal-led Aam Aadmi Party of making false claims as a “cover-up” for the charges of corruption it was facing.

Sisodia alleged AAP candidate from Surat (East) Kanchan Jariwala was forced to withdraw his nomination and abducted at the behest of the BJP which "feared" defeat on the seat in the Gujarat assembly election.

The Delhi deputy chief minister demanded that the election process in the constituency be put on hold till an impartial inquiry is held into the matter.

An EC spokesperson said AAP's representation has been sent to the CEO in Gujarat to inquire and take "action as warranted".

Sisodia claimed that Jariwala was still "missing" and his life was in danger.

However, Surat city BJP president Niranjan Zanzmera refuted the allegations and said the AAP should "take care of its own house."

Jariwala also issued a video statement in which he purportedly said he withdrew his nomination without any pressure and had followed his conscience after the people of his constituency labelled him "anti-national" and "anti-Gujarat" for contesting the election from AAP.

The AAP representation urged the poll panel not to accept Jariwala's application for withdrawal of the nomination, claiming it was obtained under “threat and coercion”.

Pressing for an inquiry, Sisodia demanded that if the BJP is found complicit, the election in the assembly seat should be rescheduled.

“The BJP first tried to get the nomination rejected by putting frivolous objections and tried to influence the proposers of the candidate by threat and coercion to backtrack their signatures on the nomination papers of AAP candidate,” Sisodia alleged while speaking to reporters.

The returning officer of Surat (East), “in all his fairness”, rejected the objections raised and accepted the nomination of AAP's Jariwala, he said.

“But the Bharatiya Janata Party (BJP) did not stop there and went on to threaten Kanchan Jariwala and also his family,” he charged.

Sisodia claimed the police personnel then took Jariwala to the nomination centre "under their protection" for the withdrawal of his nomination.

“It is not only a misuse of the police machinery but against the essence of free and fair elections. This is a horrific story and a blot on the election system that threatens to tear apart the democratic fabric of the country,” Sisodia charged, urging the poll panel to take notice of the “grave situation” and order an inquiry into the entire episode.

In his representation to the EC, Sisodia also shared a Twitter link to a video clip of the purported incident that he claimed was shot by “the local person present there”.

“The BJP leadership has taken him (Jariwala) to an undisclosed location. His mobile phones continue to remain switched off,” Sisodia claimed.

BJP leader Anurag Thakur said AAP had earlier claimed about missing MLAs in Delhi, but their legislators were found “enjoying a movie, having a meal and ice cream”.

“Those who once agitated against corruption are now neck deep in corruption,” he said.

“I am not aware of the details in this particular case, but if you take a look at their earlier statements, they were found to be fake. They make such statements only to remain in the headlines and hide their corruption,” Thakur said.

Earlier at a press conference here, Sisodia claimed Jariwala had been missing along with his family members since Tuesday, adding that the last time the AAP candidate was seen at the Election Commission's office in Surat during scrutiny of his nomination papers.

Sisodia also hit out at the Gujarat chief electoral officer and accused her of not taking appropriate action to "trace and rescue" Jariwala.

The deputy chief minister of Delhi and other party leaders held a protest outside the EC office over the alleged abduction.

EC sources said AAP's request for a meeting with the Commission was received only past noon and their dharna at Nirvachan Sadan gate preceded it.

Elections to the 182-member Gujarat Assembly will be held in two phases on December 1 and 5 and the counting of votes will be on December 8.

Voting in Surat (East) seat will be held in the first phase.