The Indian Air Force has put all its frontline bases along the 3,500-km de-facto border with China on high alert and moved in additional assets like fighter jets and attack helicopters as part of heightened state of preparedness following the clashes. 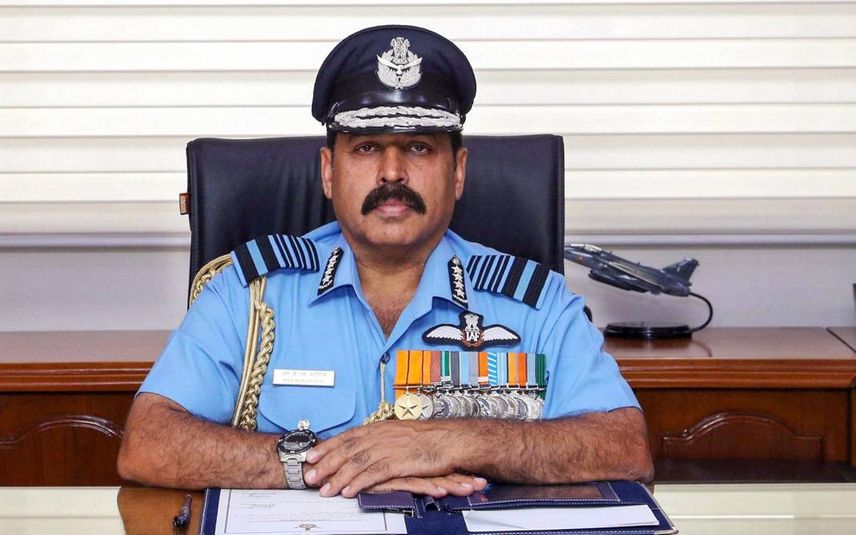 New Delhi: Air Chief Marshal RKS Bhadauria paid a two-day visit to Leh and Srinagar to oversee preparedness of the IAF in view of the massive escalation in tension with China following the violent Galwan Valley clash that left 20 Indian Army personnel dead and 76 injured, military sources said on Friday.

The Indian Air Force has put all its frontline bases along the 3,500-km de-facto border with China on high alert and moved in additional assets like fighter jets and attack helicopters as part of heightened state of preparedness following the clashes.

Air Chief Marshal Bhadauria was at the Leh IAF base on Wednesday where he reviewed operational preparedness of the force in effectively guarding the sensitive border areas in eastern Ladakh where Indian and Chinese armies have been on a nearly six-week standoff.
From Leh, he traveled to Srinagar on a day-long visit on Wednesday where he held a series of meetings with senior IAF officials.

The IAF has already moved a sizable number of its frontline Sukhoi 30 MKI, Jaguar, Mirage 2000 aircraft and Apache attack helicopters to several key air bases including Leh and Srinagar in the last three days, sources said.

It is learnt that IAF jets have increased their sorties in the eastern Ladakh region in the last few days after Chinese military increased its aerial activities in the area following the Monday evening clash in Galwan.

Bhadauria travelled to Leh on Wednesday afternoon after Defence Minister Rajnath Singh reviewed the overall security scenario with him, Chief of Defence Staff Gen Bipin Rawat, and the other two service chiefs.

In the meeting it was decided that all the frontline bases of the Indian Army and the IAF along the Line of Actual Control (LAC) with China will be put on high alert in view of the border clash in Galwan Valley.

The Indian Navy has also been asked to raise its alert level in the Indian Ocean Region where Chinese Navy has been making regular forays.

The Army has already rushed in additional troops and weaponry to all its key frontline bases and formations along the LAC in Arunachal Pradesh, Uttarakhand, Himachal Pradesh and Ladakh, sources said.

The IAF has also sent additional platforms to its bases in Sikkim, Assam and Arunachal Pradesh.

The clash in Galwan Valley is the biggest confrontation between the two militaries after their 1967 clashes in Nathu La when India lost around 80 soldiers while the death toll on the Chinese side was over 300.

The Chinese soldiers used stones, nail-studded sticks, iron rods and clubs in carrying out brutal attacks on Indian soldiers after they protested the erection of a surveillance post by China on the Indian side of the LAC in Galwan.

The two armies were engaged in a standoff in Galwan and several other areas of eastern Ladakh since May 5 when the two sides clashed on the banks of the Pangong Tso.

After the standoff began, the Indian military leadership decided that Indian troops will adopt a firm approach in dealing with the aggressive posturing by the Chinese troops in all disputed areas of Pangong Tso, Galwan Valley, Demchok and Daulat Beg Oldie.

The trigger for the face-off was China's stiff opposition to India laying a key road in the Finger area around the Pangong Tso Lake besides construction of another road connecting the Darbuk-Shayok-Daulat Beg Oldie road in Galwan Valley.

The road in the Finger area in Pangong Tso is considered crucial for India to carry out patrols. India has already decided not to stall any border infrastructure projects in eastern Ladakh despite Chinese protests.

The situation in the area deteriorated after around 250 Chinese and Indian soldiers were engaged in a violent face-off on May 5 and 6. The incident in Pangong Tso was followed by a similar incident in north Sikkim on May 9.

Prior to the clashes, both sides have been asserting that pending the final resolution of the boundary issue, it is necessary to maintain peace and tranquillity in the border areas.