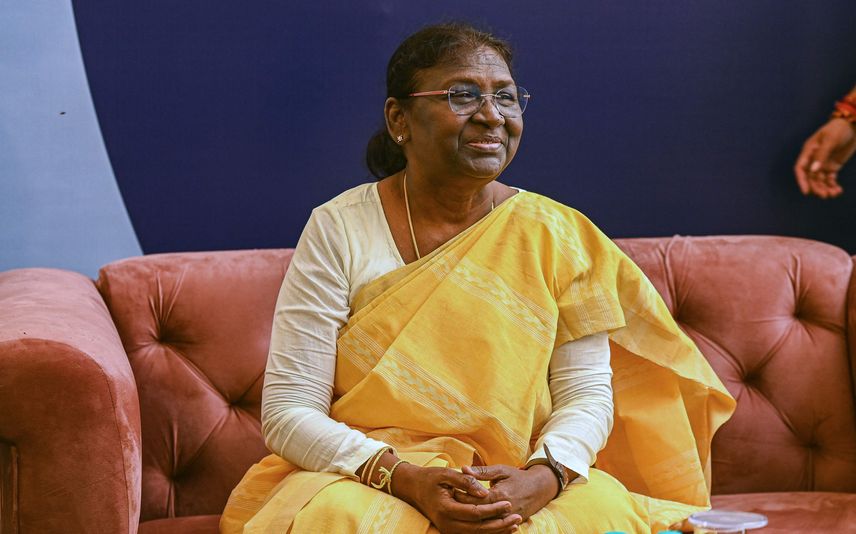 New Delhi: President-elect Droupadi Murmu, who hails from the tribal community, will take oath as the 15th President of India on Monday.

The ceremony of the assumption of office will take place in the Central Hall of Parliament.

On July 22, the former Jharkhand governor Murmu registered a historic win over her rival Yashwant Sinha in the Presidential election, becoming the first woman tribal candidate and the second woman in the country to occupy the highest office in the country.

The NDA's presidential candidate Droupadi Murmu was officially declared as the 15th President of the country after the conclusion of the counting of votes on Thursday.

Secretary General of Rajya Sabha and the Returning Officer for Presidential Election 2022, PC Mody handed over the certificate to President-elect Droupadi Murmu at her residence in Delhi.

Soon after the completion of the third round of counting, Prime Minister Narendra Modi and BJP president JP Nadda met Murmu at her residence in the national capital and extended greetings for her victory.

Prime Minister Narendra Modi congratulated Droupadi Murmu on her election as new President of the country and said she has emerged as a ray of hope for citizens, especially the poor, the marginalised and the downtrodden.

Outgoing President Ram Nath Kovind also extended his best wishes to Droupadi Murmu who will succeed him in the highest office of the country. Wishes poured in from the political fraternity across party lines on the victory of Murmu who will be India's first tribal president.

Odisha's Rairangpur village, the native place of Droupadi Murmu erupted in celebrations in anticipation of Droupadi Murmu's victory. A large crowd gathered outside BJP headquarters in Delhi earlier to celebrate her victory.

Born in a Santali tribal family on June 30, 1958 in Uparbeda village coming under Mayurbhanj district in Odisha, she had her education from Bhubaneswar and went on to work first as a junior assistant in the State Irrigation and Power Department from 1979 to 1983. After this short stint as a clerk, she became a teacher at Sri Aurobindo Integral Education Centre at Rairangpur till 1997.

Murmu commenced her journey in the field of politics in 1997 by joining the Bharatiya Janata Party (BJP). She was first elected as the councillor of the Rairangpur Nagar Panchayat and then went on to become the chairperson of the same panchayat in 2000. Later, she also served as the national vice president of the BJP Scheduled Tribe Morcha.

Murmu became a member of the council of ministers in the BJP and Biju Janata Dal coalition government in Odisha, first becoming the minister of state with independent charge for commerce and transportation from March 2000 to August 2022 and then minister for fisheries and animal resources development from August 2002 to May 2004. A legislator from Rairangpur assembly constituency in the years 2000 and 2004, she was conferred Nilkhantha Award for the best MLA by the Odisha assembly in 2007.

Reports earlier claimed that Murmu was shortlisted for the top position in 2017 as well. She herself acknowledged it when the BJP leadership announced her candidature this time.

However, during her political journey, she faced several lows in her life. Her husband Shyam Charan Murmu, passed away in 2014. She also lost both of her sons all in a span of just 4 years.

Murmu devoted her life to serving society, empowering poor, downtrodden and marginalized sections of society. She has rich administrative experience and an outstanding gubernatorial tenure in Jharkhand. Murmu has made a special identity in public life by spreading awareness about education in tribal society and serving the public for a long time as a public representative.

The President of India is the head of state in India. He/She is considered the first citizen of the country, acting on the advice of the Council of Ministers. According to article 60 of the constitution, the primary duty of the President of India is to uphold, defend, and preserve the Indian constitution and the law. The president appoints the Chief Justice of India and other judges on the advice of the chief justice.

President Ram Nath Kovind on Sunday addressed the nation on the last day of his office, expressing a belief that the country is capable of making the 21st century as the one belonging to India.

"Five years ago, you put faith in me and elected me as the president. I express my gratitude to all the Indians and their public representatives," he said in a televised address to the nation.

Protect environment for future generations: President Kovind in his farewell ...