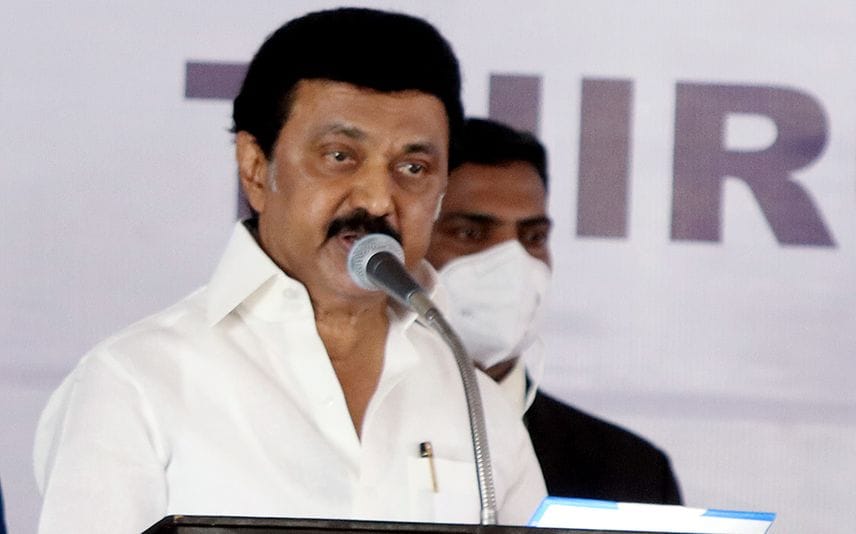 Chennai: The statement of DMK President and Tamil Nadu Chief Minister M.K. Stalin on Friday that the Centre had used its brute majority in the Parliament to pass the Dam Safety Bill is considered as a new war front being opened in Tamil Nadu against the Union government's policy.

The DMK government in Tamil Nadu had earlier come out strongly against the National Eligibility-cum-Entrance Test (NEET) and had even appointed a commission to study the 'flaws' in the national examination for selection of students to MBBS and allied courses in the country.

The passage of the Dam Safety Bill is being taken up in a similar manner by the DMK, with Stalin openly stating that even the AIADMK had supported the demand made by DMK MP, TKS Elangovan, that the bill be sent to a select committee of the Parliament.

Stalin said the BJP government at the Centre did not adhere to the demand raised by the DMK leaders in the Parliament and ruthlessly passed the Bill without referring it to the select committee, which he termed as murder of democracy.

DMK MP, Tiruchi Siva, while speaking in the Parliament during the debate on the Dam Safety Bill, had said that the Bill would infringe on the basic rights and powers vested with the state government.

The DMK leader also said that the Bill was violative of Article 252-1 of the Constitution and that the protection of state powers itself has become a question mark in the country.

The statements of Stalin, and the DMK Parliamentarians, are clear indicators that the party would move politically in the state against the Central government over the Dam Safety Bill and it will get the support of all the political parties in the state, except maybe of the Tamil Nadu unit of the BJP.

It may be noted that the Central government had presented the Dam Safety Bill, 2018 as there are 5,200 large dams in the country while 450 dams are under construction.

Political parties in Tamil Nadu are opposed to the Bill as they allege that it contains clauses that violate the rights of the state, especially with respect to dams like Mullaperiyar, which is geographically located in Kerala but maintained and managed by Tamil Nadu.

There are some other dams also that were constructed by Tamil Nadu in other states and the main concern is about retaining its power in controlling them.

It was AIADMK leader and former Chief Minister of Tamil Nadu, late J. Jayalalithaa, who had in 2016 raised concerns over the clause on the National Dam Safety Authority.

The Dam Safety Bill passed in both the Houses of the Parliament will lead to the formation of a National Committee on Dam Safety with a three-year tenure. The committee will comprise the Chairman of the Central Water Commission, a maximum of 10 representatives from the Central government in the rank of joint secretary, a maximum of seven representatives from the state governments, and three experts.

Interestingly, most of the dams in India are constructed and maintained by the states.

MDMK MP Vaiko had also expressed his strong reservation against the Bill while speaking in the Parliament during the discussion on the Bill on Thursday.

He had said that the Dam Safety Bill will not protect the dams, but instead will lead to major disasters for which Tamil Nadu would suffer.

He said that states like Kerala, Andhra Pradesh and Karnataka are throttling the neck of Tamil Nadu and that if the Dam Safety Bill is passed, Tamil Nadu would be the one state that would be affected in a bad way.

In the speech, a copy of which was made available, Vaiko said that all the neigbhouring states are proposing new dams and that this would indirectly affect the water sources of Tamil Nadu.

The Tamil Nadu Assembly had also passed an unanimous resolution during the tenure of the previous AIADMK government against the passing of the Dam Safety Bill, claiming that it would lead to unrest in the state.

With political parties like DMK and MDMK having grass-roots cadre strength coming out against the Dam Safety Bill, the situation can get out of hand in the days to come.

The DMK is buoyed by the fact that the main opposition, AIADMK, is also against the passage of the Bill and it was Jayalalithaa who had raised her concern against the Dam Safety Bill.

R. Padmanabhan, Director, Socio Economic Development Foundation, a think-tank based out of Madurai, told IANS,"The Dam Safety Bill was passed in urgency in the Parliament without any proper consultation with the state governments. Tamil Nadu will face the brunt of this decision and as Vaiko rightly pointed out, Andhra Pradesh, Kerala and Karnataka are in their own ways throttling Tamil Nadu and the people of the state cannot sit idle if the government at the Centre passes a Bill without properly consulting the state governments."

A senior leader of the AIADMK told IANS on condition of anonymity, "If AIADMK had opposed the Bill, it was due to the fact that the interests of the people of Tamil Nadu were not taken care of. It was Jayalalithaa who had pointed out to the then commission that the Bill would be against the interests of the state, and we may even join hands with the DMK against this."