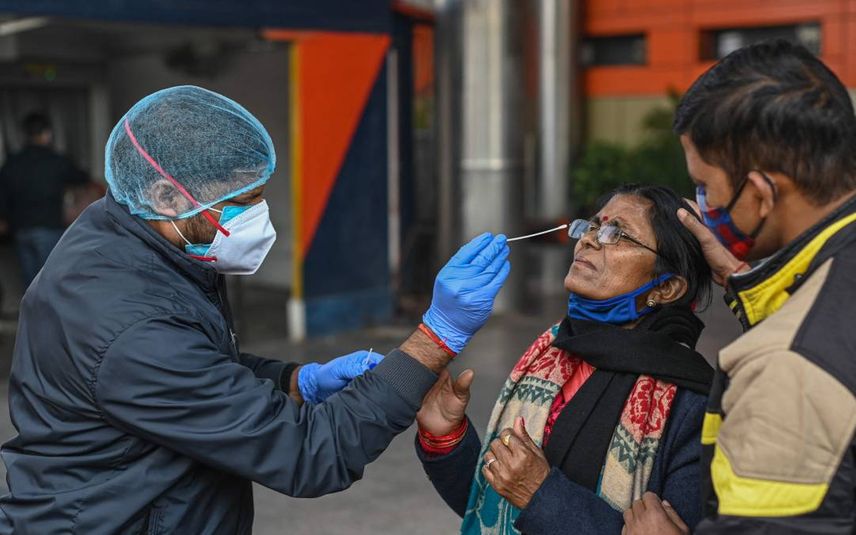 New Delhi: In a massive surge, Delhi Thursday recorded 15,097 fresh Covid cases, the highest single-day rise since May 8, and six deaths while the positivity rate mounted to 15.34 per cent, even as Health Minister Satyendar Jain said the situation does not warrant a lockdown yet.

Jain also asserted Delhi is in a comfortable position in terms of hospital bed occupancy.

The number of new cases recorded on Thursday is 41 per cent more than the figure the day before.

The city government has significantly ramped up the coronavirus testing capacity. And, according to the latest health bulletin nearly 98,500 tests were conducted a day ago.

On Wednesday and Tuesday, 10,665 and 5,481 cases were recorded with a positivity rate of 11.88 per cent and 8.37 per cent respectively, according to official figures.

The daily cases count on Thursday was 15,097 at a positivity rate of 15.34 per cent, the latest health bulletin showed.

Earlier in the day, Jain told reporters that so far, no death due to the Omicron variant of coronavirus has been confirmed in the national capital.

While cases are surging day by day, the situation in the city does not warrant a lockdown yet, he said.

The huge spike in fresh cases over the past several days here is being recorded amid a significant jump in cases of the new Omicron variant of the virus.

India on Thursday saw the biggest single-day jump of 495 Omicron cases, taking the total number of infections of the new variant of coronavirus to 2,630, according to Union health ministry data.

As per the Thursday health bulletin, the death toll due to the coronavirus infection in Delhi has now risen to 25,127.

Twenty fatalities due to coronavirus infection have been reported in the first six days of January, eight of those being registered on January 5, according to official figures.

The number of cumulative cases on Thursday stood at 14,89,463. Over 14.32 lakh patients have recovered from the infection.

During the height of the second wave of the pandemic, 28,395 cases, the highest-ever single-day tally here, and 277 deaths were recorded in Delhi on April 20 last year, according to official figures.

According to the Thursday bulletin, of the 12,850 dedicated Covid beds in Delhi, 1,091 were occupied, including by suspected cases, while 11,489 beds were lying vacant.

Jain said the number of cases in Delhi is high as a large number of people are being tested for COVID-19 in the city. “We are conducting the maximum number of tests in the country.”

Later in a statement, he was quoted as saying that there is no need to be concerned about the Omicron variant, and experts have also stated that this strain of coronavirus is "mild and less lethal".

The positivity rate recorded on Thursday was also the highest since the figure reported on May 12.

Active cases in Delhi on Thursday rose significantly to 31,498 from 23,307 the day before.

Also, in total 211 coronavirus patients were on oxygen support while 24 severe Covid patient were on ventilator, as on Thursday.

The number of people under home isolation stood at 14,937 on Thursday while it was 11,551 the day before, and the number of containment zones in the city stood at 5,168, a significant jump from 3,908 on Wednesday, the bulletin said.

Meanwhile, tourism and hospitality sector in the national capital has been hit hard as well, with field experts and owners of travel agencies and hotels in the city reporting a 60-70 per cent dip in their businesses.

The Delhi government's tourism department also reported a reduction in footfall at their tourist destinations ever since the Covid and its Omicron variant cases started rising.