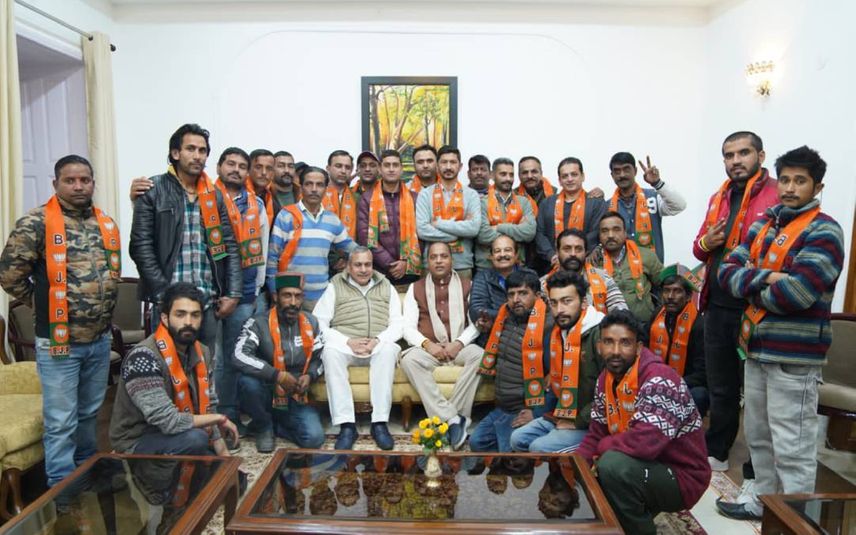 Shimla (Himachal Pradesh): Days ahead of the Assembly elections in Himachal Pradesh, several Congress leaders and members of the state including Dharampal Thakur Khand - Former General Secretary of the Pradesh Congress Committee joined the BJP on Monday.

A total of 26 leaders of the Congress party quit and joined the ruling BJP with four days to go for the vote to be cast.

This comes as a big jolt to the Congress party with less than a week to go for the polling.

The leaders jumped the boat in the presence of Chief Minister Jairam Thakur and BJP's Sudhan Singh, incharge of BJP state elections. BJP candidate from Shimla, Sanjay Sood was also present on the occasion.

Chief Minister Jairam Thakur extended a warm welcome to all the workers in the BJP.

"Let us work together for the historic victory of the BJP," he said.

Earlier, BJP national president JP Nadda exuded confidence in the party's victory ahead of the Himachal assembly elections and said that the people of the state trust Prime Minister Narendra Modi.

He lauded Chief Minister Jairam Thakur for his governance in the poll-bound state and said that he implemented policies on the ground.

While talking to the media persons in Himachal Pradesh's Solan, he said, "We are conducting public outreach programme in Solan. People are excited and have trust in PM Modi. CM Jairam Thakur has implemented policies on the ground in the state."

Himachal will go to polls on November 12, the counting of votes will take place on December 8. ANI