At the GST Council meetings, there was a feedback from State Finance Ministers about various loopholes due to which tax revenue was not accruing to the government, the Finance Minister said. 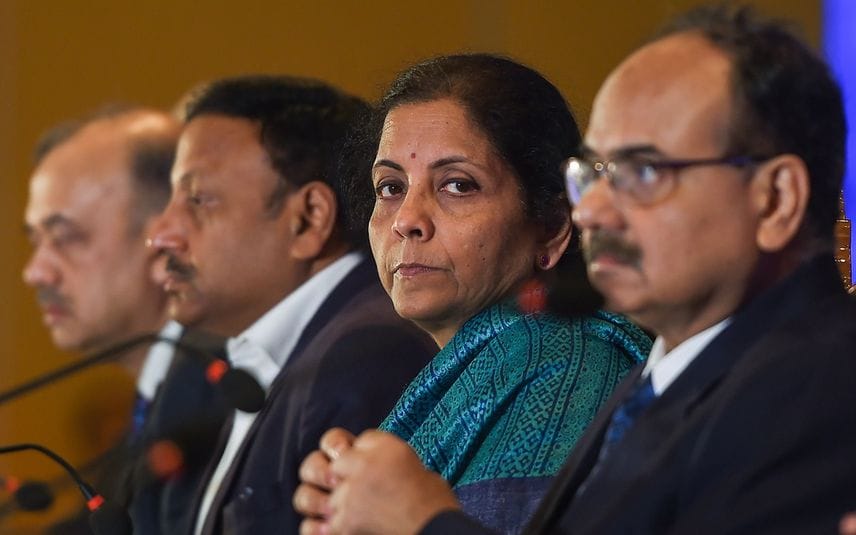 Union Minister for Finance and Corporate Affairs Nirmala Sitharaman with Finance Secretary Rajiv Kumar, Revenue Secretary Ajay Bhushan and other top officials at an interactive session on the Union Budget 2020-2021 with industrialists, in Chennai on Saturday. (PTI Photo)

Chennai: Finance Minister Nirmala Sitharaman said here on Saturday that the government was taking several steps like using data analytics to plug loopholes in the Goods and Services Tax collection and prevent particular areas of misuse and gaming of the system.

During the last three months, the GST collection crossed Rs one lakh crore every month, she said addressing a press conference here on budget 2020-21.

At the GST Council meetings, there was a feedback from State Finance Ministers about various loopholes due to which tax revenue was not accruing to the government, she said.

To plug such loopholes and to halt particular areas of misuse and gaming of the system, a lot of steps were being taken, she said.

Elaborating, Revenue Secretary Ajay Bhushan Pandey said a targeted approach was being followed by tapping on data analytics and Artificial Intelligence and it has helped improve GST collections.

The economy has also improved and the improved collection was in view of several measures taken, he said. Citing use of data analytics, he said data from income tax, the GST, customs, export and import was being mined.

A red flag report on areas of mismatch was prepared, he said, adding a large number of people were tax complaint and honest tax payers. It was only a fraction that might be a few thousand of GST taxpayers who required scrutiny, he said.

In cases of mismatch being up to a level, the tax payers are notified through a text message (SMS) and if it was large, officials are also notified to find out if the discrepancy was due to a genuine reason or otherwise.

Such targeted measures have helped the government improve the tax collections without any "overreach," he said. The government will continue to follow identification of problem areas.

"We will continue this further and improve collection through data analytics and artificial intelligence so that people who are trying to gain the system are identified in their pursuit and honest taxpayers can be completely free of hassles," he said.

To a question on scrapping of projects when a new government took office at the State level like Maharashtra and Andhra Pradesh, which has put the confidence of investors at a low level and the role of the Centre to avert such a situation, Sitharaman favoured engagement with the States to address the matter.

On the "damage," it has caused she said: "I hope not much damage." On pending Tamil Nadu's GST share from the Centre, she asserted that all states were being treated equally and it was not correct to say as if Tamil Nadu was being singled out.

The pending arrears of share to states will be disbursed in two installments, she said.

Asked about listing of LIC, she said the government has not decided yet on the percentage, the extent of its holding that will be put up for Initial Public Offering. She exuded confidence that the move would enhance transparency, discipline and further improve management.