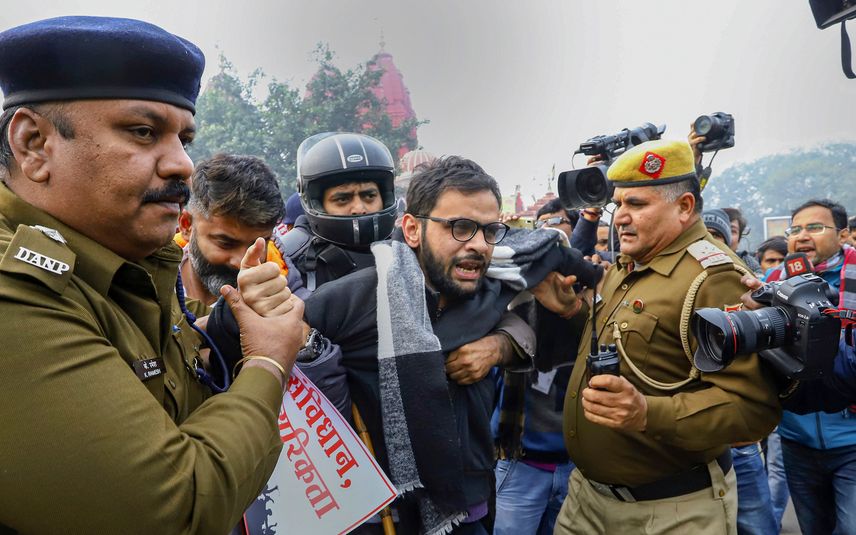 Additional Sessions Judge Pulastya Pramachala passed the order while directing that charges be framed against Aam Aadmi Party (AAP) leader Tahir Hussain and 10 others in the case related to alleged rioting, vandalism and arson at a parking lot in February 2020.

Khalid and Saifi, who were already on bail in the present case, however, will remain in jail since they were also arrested in other cases related to the riots, including one pertaining to the larger conspiracy behind it.

The court granted relief to both the accused, along with Tariq Moin Rizvi, Jagar Khan and Mohd Illiyas, on a bond on Rs 10,000 with one surety in the like amount, citing lack of evidence against them to put them on trial.

The bail bond is imposed to ensure the appearance of the accused, who is out of jail, before an superior court if the order of discharge is challenged.

"Insofar as the discharge of Umar Khalid and Khalid Saifi is concerned, the court was of the opinion that the evidence against them pertains to the larger conspiracy case, being probed by the special cell of Delhi police, which is pending trial before the court of Special Judge Amitabh Rawat,” Special Public Prosecutor Madhukar Pandey said.

The court further directed to put AAP leader Hussain and 10 other co-accused on trial for the alleged offences including rioting and arson on December 17.

The court directed charges to be framed under IPC sections, including 120B (criminal conspiracy), 147 (rioting), 153A (promoting enmity between different groups), 395 (dacoity), 435 (mischief by fire or explosive substance) and 454 (house-trespass).

A copy of the detailed order is still awaited.

The Karawal Nagar police station had registered an FIR against the accused persons under various provisions of the IPC, including rioting and criminal conspiracy along with the sections of the Arms Act and the Prevention of Damage to Property Act.

The investigation of the case was later transferred to the Crime Branch.

The court, meanwhile, also directed that charges be framed against Hussain and others in another case related to an incident of rioting and arson in a banquet hall during the riots.

Those discharged in the first case were not named as accused in the second case. PTI