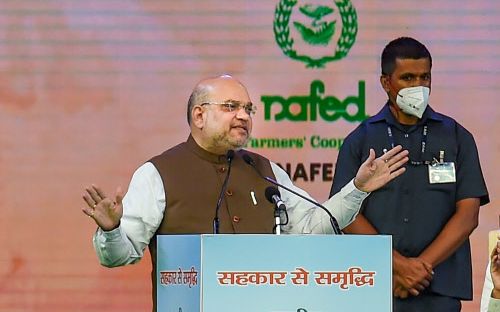 Addressing the first Cooperative conference here, he said that the cooperative sector will have a major role in achieving Prime Minister Narendra Modi's target of $5 trillion economy by 2025 and after creating a new Ministry, nobody will be able to do injustice to this sector.

He said that the government will bring a new cooperative policy with suitable changes, the new policy will be implemented by the end of the year.

"Many people say that cooperative is state subject but I must tell you that we will not have any confrontation with the states and will be working with them in poverty amelioration and help them in the matter of cooperatives", Shah said.

He also said that all Pax, district cooperative banks, National Bank for Agriculture and Rural Development and other important financial institutions will be revamped with a new software system.

He also urged the representatives of the various cooperative federations to make this sector successful, training, skill development and transparency was required for filling in posts and appointing office bearers.

Shah also said that creating the Ministry of Cooperation was the need of the hour and this will develop the poor, farmers, women and downtrodden of the society.

The PM Modi's mantra of 'sahkar se samridhi' (prosperity from cooperation) will play an important role in poverty alleviation in rural India.

The Minister also attacked the critics who say that the days of the cooperatives are over. Referring to the example of Amul Cooperative, Shah further said that it was created on the vision of Sardar Patel with only 80 farmers in 1946 and now the turnover has been over Rs 53,000 crore per annum.