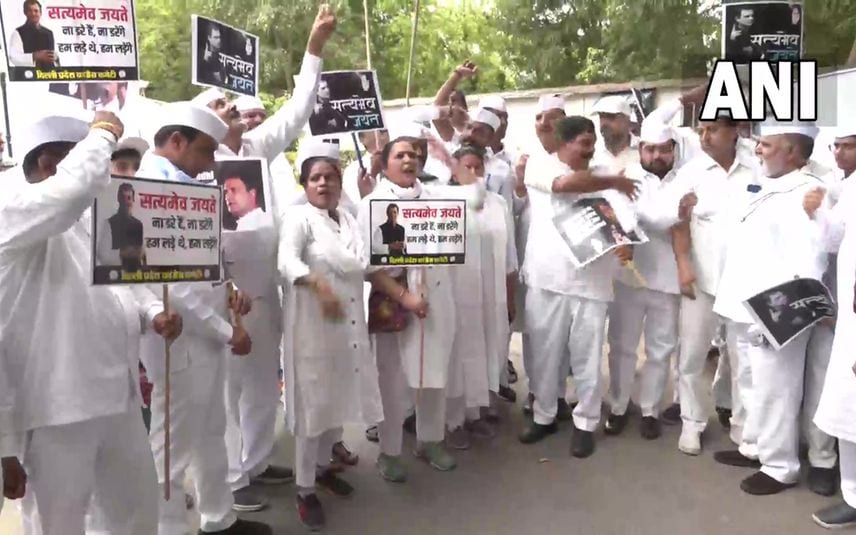 New Delhi: Congress workers on Monday staged a protest holding placards in support of party leader Rahul Gandhi ahead of his appearance for questioning before the Enforcement Directorate in the National Herald case in New Delhi today.

Some Congress workers were detained near the party headquarters in the city.

The party has planned march from party headquarters to the ED office and will hold 'satyagrahas' outside the ED offices in states in solidarity with Rahul Gandhi.

According to sources, Congress MPs, and Congress Working Committee (CWC) members have also been asked to be present in Delhi on Monday for the rally.

Delhi Police, however, had denied permission to a Congress rally. The Delhi police cited law and order behind the denial of the permission for the rally.

"Congress leaders will stay united. Police are being used for a different purpose, but we will continue to carry forward our work," senior Congress leader and Chhattisgarh health minister TS Singh Deo who is in Delhi said.

Earlier, Congress leader Manickam Tagore said that party workers will hold demonstrations at around 25 offices of the probe agency across the country against the political vendata and the "misuse" of the central investigative agencies by the Central government to "silence the voice of opposition".

Meanwhile, police have been deployed outside Congress leader Rahul Gandhi's residence ahead of his appearance before ED. Additional security forces have been also deployed outside the Enforcement Directorate office in the national capital.

Delhi Police has detained Congress leaders amid sloganeering in support of party leader Rahul Gandhi ahead of his appearance before ED.

The posters stating, "I am not Savarkar, I am Rahul Gandhi", "truth will prevail" and "Dear Modi and Shah, this is Rahul Gandhi, he will not bow down" were seen outside Rahul Gandhi's residence in Delhi.

Rahul Gandhi was earlier summoned to join the investigation but he was out of the country and later he was given a fresh date of June 13 to join the probe.

ED on Friday issued a fresh summons to Sonia Gandhi asking her to appear on June 23 for questioning in connection with the National Herald money laundering case.

The ED wants to record both Sonia Gandhi and Rahul Gandhi's statements under criminal sections of the Prevention of Money Laundering Act (PMLA).

Meanwhile, the Congress party has alleged that it is a "political vendetta" and the case has no grounds for investigation.

The ED also questioned senior Congress leader Mallikarjun Kharge and Congress Treasurer Pawan Bansal in April this year in New Delhi in connection with its money laundering probe into the National Herald case.

The agency then recorded the statements of both the Congress leaders under the Prevention of Money Laundering Act (PMLA). The National Herald is published by Associated Journals Limited (AJL) and owned by Young Indian Private Limited (YIL). While Kharge is the CEO of YIL, Bansal is the Managing Director of AJL.

The case, pertaining to the investigation of the alleged financial irregularities under the PMLA, was registered about nine months ago after a trial court took cognisance of the Income Tax Department probe carried out on the basis of a private criminal complaint filed by former Bharatiya Janata Party (BJP) MP Subramanian Swamy in 2013.

The ED is currently investigating the shareholding pattern and financial transactions as well as the role of party functionaries in the functioning of the AJL and YIL.

The National Herald is published by AJL and owned by YIL. While Kharge is the CEO of YIL, Bansal is the Managing Director of AJL.