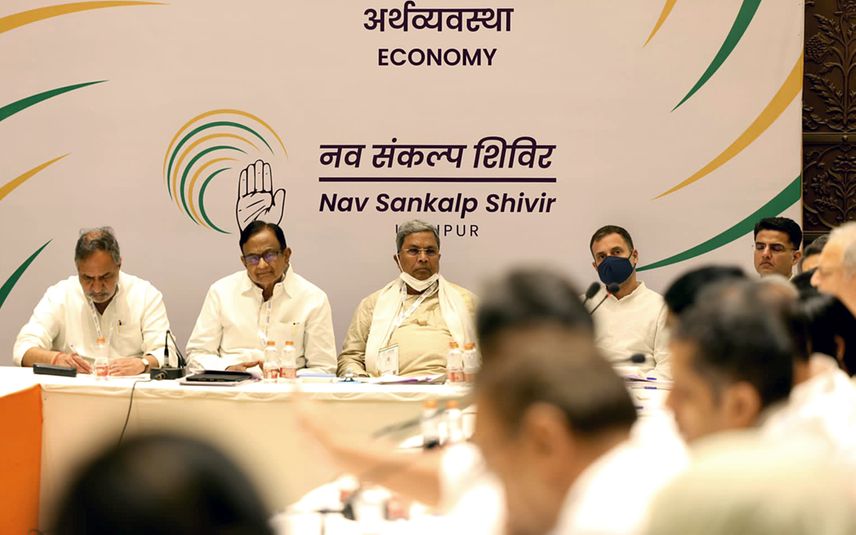 New Delhi: Congress will hold two-day state-level 'shivirs' to discuss the decisions of the "Udaipur Declaration" adopted during the three-day "Chintan Shivir" in Rajasthan.

"On June 1 and 2, General Secretaries and Incharges will hold two-day workship which will be attended by our MPs, MLAs, MP and MLA candidates, District Congress Committee presidents, Pradesh Congress Committee office-bearers, and prominent leaders of the party. In two-day 'shivirs', points and the way ahead taken from the Udaipur Declaration will be discussed," AICC general secretary and chief spokesperson Randeep Surjewala said.

"As a follow-up exercise, a similar one-day shivir will be held on June 11 at the district Congress committees," he added.

Congress general secretary KC Venugopal has written a letter to General Secretaries and Incharges in states and asked them to organize a two-day state-level workshop on June 1 and 2.

"All the AICC General Secretaries and Incharges are requested to spend their full two days in the State Level Workshop. Agenda for the state and the district level workshops shall be communicated shortly," Venugopal stated.

The letter accessed by ANI mentioned that general secretaries and in-charges will decide to organize a two days state-level workshop on June 1 and 2 to discuss and plan the execution of the Udaipur Nav Sankalp Declaration at the state level.

It is further mentioned that a one-day district-level workshop between June 11 to 14 will also be held to discuss and plan the execution of the Udaipur Nav Sankalp Declaration at the district and lower levels.

A 75 km long padayatra to be taken up by every DCC, starting on August 9 this year, the letter read.

The grand old party was also will organize on August 15, a state-level massive program at the Congress state headquarters to culminate the 75th Anniversary of India's Independence.

A Political Affairs Committee to be constituted at the state level which would meet once every month.

At the end of Chintan Shivir, as a part of the party's outreach program, Congress will launch a nationwide yatra "Kanyakumari to Kashmir Bharat Jodo" beginning on October 2.

Speaking on the concluding day of the three-day brainstorming session, Chintan Shivir, in Udaipur, Sonia Gandhi said, "We will launch a national Kanyakumari to Kashmir Bharat Jodo Yatra beginning on Gandhi Jayanti this year."

"All of us will participate in it. The Yatra is to strengthen the bonds of social harmony that are under stress, to preserve the foundational values of our Constitution that are under assault and to highlight the day-to-day concerns of crores of our people," she said.