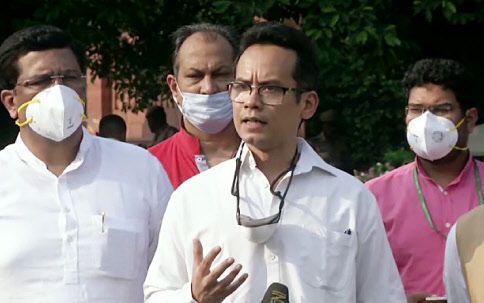 New Delhi: Deputy Leader of the INC in the Lok Sabha Gaurav Gogoi on Tuesday said that the Bharatiya Janata Party's (BJP) step is "draconian" after Congress loses its chairmanship of the parliamentary committee on IT.

He alleged that BJP is building the foundation of a surveillance state where citizens' rights are subjugated and institutional checks are obliterated.

"A draconian step by the BJP. Seems like Prime Minister Modi is fascinated by Chinese single-party rule and the Russian oligarchy model. He is building the foundation of a surveillance state where citizens' rights are subjugated and institutional checks are obliterated," tweeted Gogoi.

A major reshuffle took place in the Parliamentary panels on Tuesday as Congress lost the Home and the crucial Information Technology and Communications panels among others.

According to an official notification, Congress leader Abhishek Manu Singhvi who headed the Home panel was replaced by BJP Rajya Sabha MP and former DGP of Uttar Pradesh Brij Lal who has been named as the new chair.

Another loss for the grand old party is losing the committee for IT which was chaired by Lok Sabha MP Dr Shashi Tharoor. The Eknath Shinde-led faction of Shiv Sena now has its chairmanship in three-time Lok Sabha MP Prataprao Jadhav.

The Standing Committee for Environment and Forests is currently with the Congress party. Jairam Ramesh remains its chairman.

Professor Ram Gopal Yadav from the Samajwadi party, who had been holding the post for a long time as chairman of the Health Committee, has been replaced by BJP MP Bhubaneshwar Kalita.It will be the gain of a committee for DMK as the party has the chairmanship of the Industry Committee with Tiruchi Siva as chief.

YSR Congress which had earlier had Commerce has swapped for the big Transport Tourism & Aviation Committee with Vijaysai Reddy as chief.

The panel on Education, Women, Children, Youth and Sports will now be chaired by BJP MP Vivek Thakur after its earlier chairman Dr Vinay Shahastrabuddhe retired.

Senior Member of Parliament Jagdambika Pal is now the Chairman of the Energy panel whereas the JDU leader Lallan Singh will head Urban Development.

Trinamool Congress which had one chairman in the form of Lok Sabha MP Sudip Bandyopadhyay will have no chairmanship.

"We have seen how the Trinamool Congress has behaved with the BJP in West Bengal and it's time for them to get a dose of their own medicine as they have been extremely unkind in their approach towards opposition in the state," a source aware of the development told ANI.

The chiefs of two more panels which were reportedly offered to the Congress party including Commerce and Chemical Fertilisers are yet to be announced because the Congress party, as per sources, has still not given their party MP names.

Several vacancies were created in various committees in addition to the ending of the terms of the standing committee with more than 100 members of Parliament retiring from the Upper House recently.