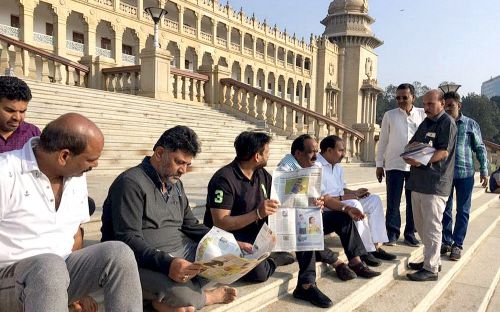 Congress MLAs, including DK Shivakumar, sit outside the Vidhana Soudha as part of an overnight protest demanding the State Minister KS Eshwarappa's resignation over his alleged remark on the National flag, in Bengaluru on Friday. (ANI Photo)

The protest began after Chief Minister Basavaraj Bommai on Wednesday accused Congress of violating the flag code in the Assembly when they held a protest against the Minister who said that the saffron flag in the future could become the national flag and it will be unfurled at the Red Fort.

The Chief Minister said that the Congress leaders were selectively quoting a part of the minister's statement and were misleading the Assembly and people.

Triggering a controversy, Eshwarappa on Wednesday said that the saffron flag in the future could become the national flag and it will be unfurled at the Red Fort.

"Not today but someday in the future maybe after 100, 200, or 500 years, the saffron flag may become the national flag. People used to laugh over the construction of the Ram temple in Ayodhya. Are we not building the temple now? Now Hindutva is being discussed in the country," Eshwarappa had said. (ANI)