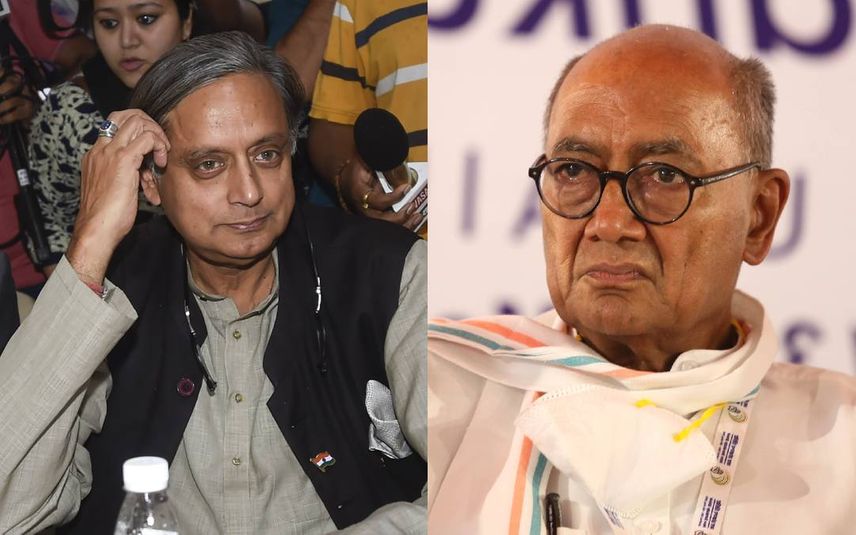 New Delhi: Veteran Congress leader Digvijaya Singh on Thursday said that he will contest the polls for party president even as Rajasthan chief minister Ashok Gehlot arrived here for a meeting with Sonia Gandhi after a rebellion over his candidature to the post by MLAs in the state loyal to him.

Singh told reporters outside the AICC headquarters that he was here to collect his nomination form from the party's Central Election Authority (CEA) and that he is likely to file his nomination tomorrow.

"Today I have come here to collect the nomination form and will possibly file it tomorrow," Singh said.

He said that the decision to contest was solely his and he had not consulted with anybody else. "I represent myself...The time is between 11 and 3 (when he will file the nominations tomorrow)," Singh told the media persons.

On being asked whether his entering the race for the top Congress post will be a face-off against Rajasthan chief minister Ashok Gehlot, who has also been a top contender in the race besides Shashi Tharoor, Singh asked to wait and see till October 8, the last date of withdrawal of nominations.

"Wait till 8th, the date of withdrawal," the former chief minister of Madhya Pradesh said.

When pressed on the issue, Singh said "Why dont you take me seriously?

The veteran leader had met with Rahul Gandhi in Kerala at the party's Bharat Jodo Yatra and had arrived in the national capital late Wednesday evening.

The entry of Digvijaya Singh has made the battle for the top Congress post interesting as G23 leader Shashi Tharoor is likely to file the nomination on Friday.

Till now, only Shashi Tharoor has declared his candidature for the party president, while there are speculations about Gehlot being in the fray ahead of which the party has seen a huge political turmoil in Rajasthan, following which a show cause notice has been sent to three of his loyalists causing some uncertainty about his candidature.

The MLAs of the Gehlot camp had not attended the meeting of the Congress legislative party (CLP) scheduled on Sunday evening at the residence of Gehlot in Jaipur the presence of the observers, which was attended by the Sachin Pilot and his camp MLAs. Gehlot loyalists had held a meeting with Cabinet Minister Shanti Dhariwal at his residence, following which over 90 MLAs had submitted their resignations to Speaker CP Joshi.

Gehlot on Wednesday sought to play down the political crisis in the state for which three of his loyalists have been issued show cause notice by the party's central leadership and said, "internal politics goes on, we'll resolve it".

Talking to reporters, Gehlot said the party works under the Congress president and decisions will be taken in the time to come.

He said Congress workers worry about the direction in which the country is heading and tackling the issue was more important.

The nomination process for election to Congress next president will continue till September 30 and the election result will be declared on October 19.

Earlier on Wednesday, Congress leader KC Venugopal said that there "is no drama" in the state and everything will be clear in a day or two about who will be the next chief minister.

Not disappointed, election has galvanised Cong workers: Tharoor on losing ...