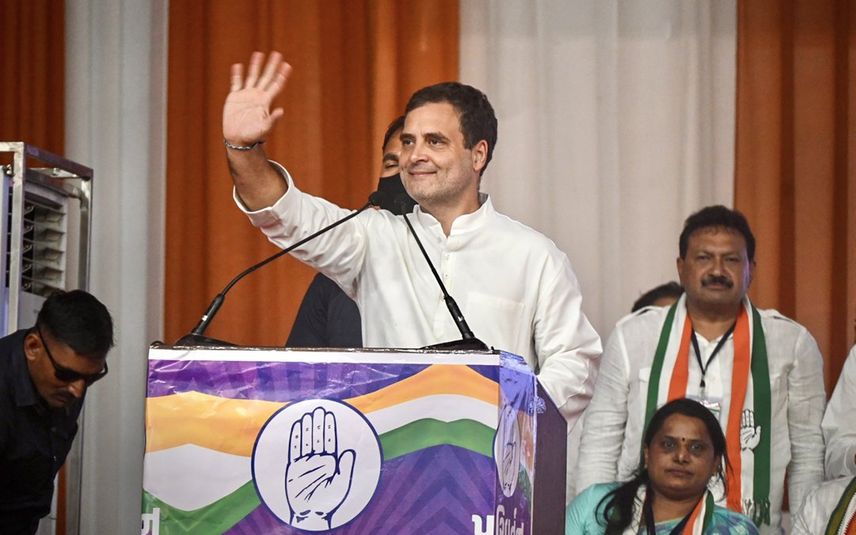 Kanyakumari: A day before the launch of the much-touted 3,570-km 'Bharat Jodo Yatra', the Congress on Tuesday said it is a "transformational moment" for Indian politics and a "decisive moment" for the party's rejuvenation.

With the launch of the 'Bharat Jodo Yatra' on Wednesday at a mega rally here, the Congress is seeking to flag problems of economic disparities, social polarisation and political centralisation, while also attempting to make gains in what it often describes as the battle of ideologies.

Before the launch of the march, former Congress president Rahul Gandhi will take part in a prayer meeting at ex-prime minister Rajiv Gandhi's memorial in Sriperumbudur on Wednesday.

He will then attend an event in Kanyakumari where Tamil Nadu Chief Minister M K Stalin, Rajasthan's Ashok Gehlot and Chhattisgarh's Bhupesh Baghel will be present. Gandhi will be presented with a national flag made of khadi.

After the event at the Mahatma Gandhi Mandapam where Stalin will be present, Rahul Gandhi, along with other Congress leaders will walk to the seaside venue of the public rally where the yatra will be formally launched.

Interacting with reporters here a day before the launch of the march, Congress general secretary in-charge communications Jairam Ramesh said the Yatra is a "transformational moment for Indian politics and it is a decisive moment for the rejuvenation of the Congress party".

In a video message, Priyanka Gandhi Vadra urged people to join the Bharat Jodo Yatra wherever possible. She asserted that the Yatra was needed as "negative politics was being practised in the country and real issues of the people were not being discussed".

The Yatra aims to put the focus on issues of the people such as price rise and unemployment, she said.

Though the 3,570-km march from Kanyakumari to Srinagar, covering 12 states and two Union Territories in about five months, will be formally launched at the rally, it will actually begin at 7 am on September 8 when Gandhi and several other Congress leaders will embark on the march.

Before the launch of the yatra, Rahul Gandhi will also visit the Vivekananda Rock Memorial, Thiruvalluvar Statue and Kamaraj Memorial in Kanyakumari.

Ahead of the Yatra, Rahul Gandhi has said with all paths “blocked” by the government, the Congress now has to go to the people and tell them the truth, and that is why the party is undertaking the 'Bharat Jodo Yatra'.

"Our institutions, whether it is the media, Election Commission, judiciary, there is an attack on them, there is pressure on them. So, all the roads are closed for us. There is only one way left, to go to the people, the truth of the country has to be told to the people, that is why the party is undertaking the Bharat Jodo Yatra," he had said.

Ramesh has said there is a need for the 'Bharat Jodo Yatra' because "the country is being divided".

"The first reason for the division is economic disparity, the second is social polarisation and the third is political centralisation as states' rights are being snatched away. So, it is important to unite the country. If not now, then when," he had said.

The footmarch will move in two batches – one from 7 am to 10:30 am and the other from 3:30 pm to 6:30 pm. While the morning session will include fewer participants, the evening session will see mass mobilisation. On average, the participants plan to walk around 22 to 23 km daily.

The Congress has asserted that its Yatra from Kashmir to Kanyakumari is not a 'Mann Ki Baat' in any manner, but its objective is to ensure that the concerns and demands of the people reach Delhi.

It has classified 119 leaders, including Gandhi, as 'Bharat Yatris' who will walk the entire route from Kanyakumari to Srinagar. About 30 per cent of the ‘Bharat Yatris' are women. The average age of the participants is 38.

About 50,000 non-party citizens have also registered till now to participate in the Yatra.

To coincide with the launch of the Yatra on Wednesday, 'Prarthana Sabhas' will be held by all state units of the Congress at 5 pm, a senior leader said. At 7 am on Thursday, 10 km foot marches will be held at the block level to mark the start of the main Yatra.

The 'padayatra' will reach Kerala on September 11 and will traverse through the state for the next 18 days, reaching Karnataka on September 30. It will remain in Karnataka for 21 days before moving to other states northwards.

The classification of those participating in the yatra is -- 'Bharat Yatris', 'Atithi Yatris', 'Pradesh Yatris' and 'Volunteer Yatris'. The tagline of the yatra is 'Mile Kadam, Jude Watan'.