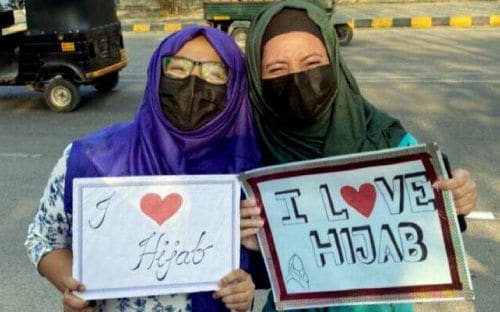 Students stage a protest in support of those who are protesting in favour of Hijab after allegedly denying entry of Students wearing hijab to Government PU College in Karnataka's Kundapur, on Saturday. (ANI Photo)

New Delhi: The Congress on Monday the rejected remarks made by its MLA in Karnataka that Hijab is an old practice among Muslims to not show the beauty of young girls to others.

Party general secretary and chief spokesperson Randeep Surjewala said there is no place in modern India for such "regressive views".

The BJP hit out at the Congress alleging that the party MLA in Karnataka has trivialised rape by claiming that those not wearing burqa invite rape.

Congress MLA from Chamrajpet Zameer Ahmed said that Hijab among Muslims means in 'purdah' and is it an age-old practice.

"When girls grow up, they are kept in 'purdah' to hide their beauty. Rape rate is the highest in India and it is because women are not in 'purdah'," he said in Karnataka.

"This is not compulsory but for those who don't want to show their beauty to others. Hijab is not new...," he added.

Distancing the Congress from the remarks, Surjewala said, "There is no place in modern India and our society for parochial and regressive views on women as expressed by a Congress leader of Karnataka."

He said such dogmatic views are reserved for BJP leaders as seen in the past in outlandish remarks made by Uttar Pradesh Chief Minister Yogi Adityanath, his Haryana counterpart Manohar Lal Khattar and others.

"India's women, irrespective of religion or caste, are representative of 'Shakti' from times immemorial. Women have made India proud in every sphere by their grit, independence and determination. Time has come for every such leader to change the conservative mindset," the AICC general secretary said.

BJP social media department head Amit Malviya, while crtiicising the remarks, said on Twitter, "Priyanka Vadra says women should be free to wear (to school) whatever they want, including bikini. On the other hand, Congress MLA Zameer Ahmed says those not wearing burqa invite rape. This kind of regressive mindset shows Congress' utter disregard for women. #DontTrivialiseRape."