Cong a 'loot engine' that wants to come to power anyhow to fill its 'empty coffers': Modi

The Congress can go to any extent for coming to power and this is evident from the "lies" that they are spreading through their manifesto and the alliances they are entering to gain power, the Prime Minister said at an election rally in Bokakhat in Golaghat district. 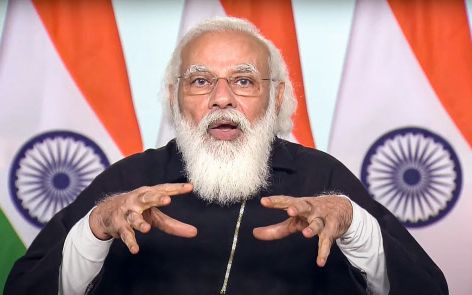 Bokakhat (Assam): Prime Minister Narendra Modi on Sunday called Congress a "loot engine" which is desperate to come to power in Assam "at any cost" to fill its "empty coffers."

Making fun of the grand old party giving guarantees to the people if they are voted to power in Assam, Modi said they gave "false guarantees" of providig jobs and empowering women but did nothing when it was in power at the centre and also in Assam at the same time earlier.

The Congress can go to any extent for coming to power and this is evident from the "lies" that they are spreading through their manifesto and the alliances they are entering to gain power, the Prime Minister said at an election rally in Bokakhat in Golaghat district.

"When there was a Congress government at the centre and the state at the same time, there was double neglect, double corruption and double infiltration", he mockingly said.

There was nobody to listen to the people either in Assam or at the centre and now they should keep the "'loot engine Congress' far away from them as the party only makes false promises and gives false hopes to the poor," he said.

"The party's coffers are empty and they want to come to power at any cost to fill it. They have no vision and for them the chair is the friend (unke toh kursi hi dost hain) and to attain that they can go to any extent", he added.

They have entered into alliances with the sole motive of coming to power.

In West Bengal, they have entered into alliance with the Left and in Kerala they are fighting against them, he said to drive home the point.

"In Assam, Kerala and West Bengal, the Congress has entered into alliances with the communal forces as they cannot look beyond power and they claim to be secular. Nobody in the country now believes them", he alleged.

Congress has a tie-up with the AIUDF of MP Badruddin Ajmal in Assam, while in Bengal it has joined hands with the Left and Indian Secular Front of the Muslim cleric Abbas Siddiqui and in Kerala its partner is Indian Union of Muslim League.

On the other hands, the double engine NDA government in Assam has ensured that the foundation for development is laid and the state is connected with the rest of the country, while during the next five year, there will be more all-around speedy development, the Prime Minister said.

During Congress rule, people thought will Assam be ever free of bomb blasts, guns or violence and peace will prevail, but the NDA government has ensured that there is peace and stability in the state, he said.

He also accused the Congress of patronising poachers and said the NDA government has ensured that rhino poaching is stopped and poachers are put in jails, while the famed Kaziranga National Park has been freed of encroachers.

"Our priority is simple and clear, to ensure both animal protection and also provide basic facilities of living and the NDA goverenment in the state is doing that for the last five years with the result that the green cover in Assam has increased", he said.

He further accused the Congress of doing 'Chai pe rajneeti' (politics over tea) when they have actually done nothing for the people of the tea growing community.

Referring to the increase in the daily wages of the tea garden workers, Modi said the Assam government is serious and committed to their welfare and during the last five years, it has been increased twice.

"The matter is now in the court and there are some difficulties due to that but once the NDA government is formed again, the matter will be resolved speedily," Modi said.

Another important sector in Assam is the petroleum and gas sector with the NDA government investing over Rs 40,000 crore to increase its production capacity and in Numaligarh Refinery Limited, it has invested over Rs 1300 crore for the bio- refinery project for production of ethanol from bamboo, to increase employment oppurtunities for the locals, he said.

Bamboo plantation, creation of value chain, marketing of bamboo products, formulating a special policy and creating a special zone for the bamboo and cane industry are some of the steps taken by the Assam government for the state, he said.

The Prime Minister also paid tribute to legendary Ahom General Lachit Barphukan and said it was former Prime Minister Atal Bihari Vajpayee who had instituted gold medal award for the best cadet at the National Defence Academy in his name and the state government also observes his birth anniversary with great reverence.

"Lachit Barphukan not only saved Assam from foreign invaders but his military strategy was 'swadeshi' and he used the mighty Brahmaputra to strengthen his naval power. It is this spirit of 'atmanirbhar' that we are following to strengthen our naval power," he said.

"We are also using the water resources of our country for economic prosperity. In Assam also extensive work is going on to develop its water resources", he added. PTI