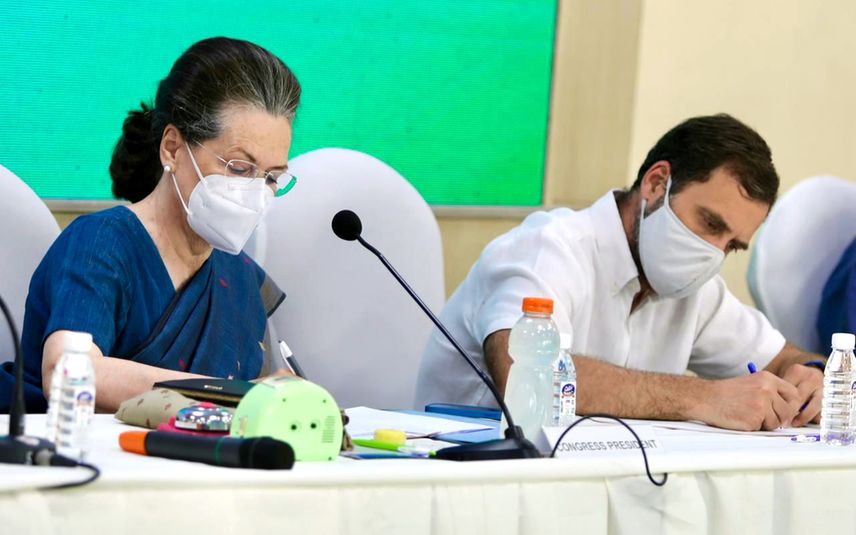 New Delhi: After the G23 meeting concluded at senior Congress leader Ghulam Nabi Azad's residence to deliberate on the 'demoralizing outcome' of the recent results of the Assembly elections, the Congress' G23 leaders on Wednesday said that the only way forward for the party is to adopt the model of collective and inclusive leadership and decision making at all levels.

The joint statement of Congress' G23 leaders read, "We the following members of the Congress Party met to deliberate on the demoralizing outcome of the recent results of the Assembly elections and the constant exodus of both our workers and leaders."

It further said, "We believe that the only way forward is for the Congress to adopt the model of collective and inclusive leadership and decision making at all levels," he further added.

In order to oppose the Bharatiya Janata Party (BJP), it is necessary to strengthen the Congress Party. We demand the Congress party to initiate dialogue with other likeminded forces to create a platform to pave the way for a credible alternative for 2024 and the next steps in this regard will be announced soon," it said.

As per the statement, the meeting was held in the knowledge of party chief Sonia Gandhi and "she was informed of the meeting when Azad and the party chief had a telephonic conversation on Tuesday to have a meeting on Thursday."

The statement said that the meeting was called to inform the rest of the members about the discussion held in the Congress Working Committee (CWC) and to decide on a further strategy.

G23 leaders including Shashi Tharoor, Kapil Sibbal, Mani Shankar Aiyar, Manish Tiwari, and others were seen leaving the residence of Azad after the meeting ended.

Following the poll debacle of Congress in five states and a row and accountability over leadership, senior Congress leader and member of the dissident "G-23" group of leaders Ghulam Nabi Azad, is likely to meet party chief Sonia Gandhi at 10 Janpath on Thursday, the time of which is yet to be finalized from the party chief's office.

Azad hosted a number of G23 leaders at his residence on Wednesday.

The meeting was earlier set to be held at the residence of Kapil Sibal, who had invited the leaders of G23 and other parties to his residence for dinner but the venue was shifted to Azad's residence after Sibal's recent "attack" on the Gandhis. Sibal had after the Congress' rout in five assembly polls had given an interview to a newspaper said that it was time for a leadership change in the party and for someone else other than the Gandhis to head the Congress.

According to sources, the Congress leadership is extremely unhappy with Kapil Sibal and also with Anand Sharma. A middle way can be found only after the meeting of Azad and Sonia Gandhi, said sources.

Rahul sprints, others try to catch up as Bharat Jodo Yatra enters Day 5 ...