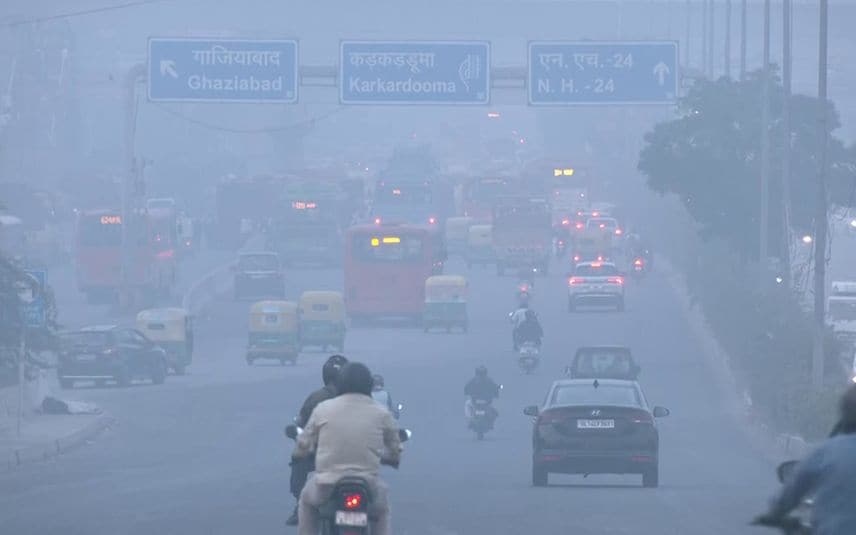 New Delhi: A layer of smoky haze shrouded Delhi as its air quality deteriorated to the upper end of the "very poor" category on Tuesday due to calmer winds.

The air quality is forecast to become worse over the next two days due to unhelpful meteorological conditions. Favourable wind speed -- 15 to 20 kmph -- is predicted to bring a considerable improvement from November 11.

Farm fires in Punjab dropped from 2,487 on Monday to 605 on Tuesday. Their share in Delhi's PM2.5 pollution dipped from 14 per cent on Monday to 9 per cent on Tuesday, according to data from the Indian Agricultural Research Institute and SAFAR, a forecasting agency under the Union Ministry of Earth Sciences.

The haze during the day lowered visibility to 800 meters and 900 meters at the Safdarjung and Palam airports, respectively, an official at the India Meteorological Department (IMD) said.

"Though the contribution of stubble burning is not significant, calmer local winds are slowing accumulation of locally generated pollutants," he said, adding that the wind speed is likely to improve to 15-20 kmph from Friday onwards.

The Delhi government on Monday decided to reopen primary classes from November 9 and revoke the order asking 50 per cent of its staff to work from home in view of improvement in the city's air quality over the last two days.

However, plying of BS-III petrol and BS-IV diesel four-wheelers in Delhi will remain banned under stage 3 of the Graded Response Action Plan (GRAP), Delhi Environment Minister Gopal Rai had said.

Violation of the ban could invite a fine of Rs 20,000. Vehicles deployed for emergency services, and government and election-related work are exempted.

The Delhi government will run 500 additional buses in the capital under the "Paryavaran Bus Sewa" campaign to bolster public transport in a bid to reduce vehicular emissions.

According to a study conducted by The Energy and Resources Institute in 2018, vehicular emissions account for around 40 per cent of the PM 2.5 pollution in the capital.

With air pollution ameliorating in Delhi, the Commission for Air Quality Management (CAQM) on Sunday directed authorities to lift the ban on plying of non-BS VI diesel light motor vehicles in the region and the entry of trucks into the capital imposed under the stage 4 of the GRAP.

It had also banned construction work in public projects such as highways, flyovers, power transmission, and pipelines in Delhi-NCR.

The CAQM order recommending the restrictions was issued on Thursday.

According to an analysis conducted by the Delhi Pollution Control Committee last year, people in the national capital breathe the worst air between November 1 and November 15 when stubble burning peaks and winters set in.

The Air Quality Life Index (AQLI) released by the Energy Policy Institute at the University of Chicago (EPIC) in June showed that residents of Delhi stand to lose 10 years of life expectancy due to poor air quality.