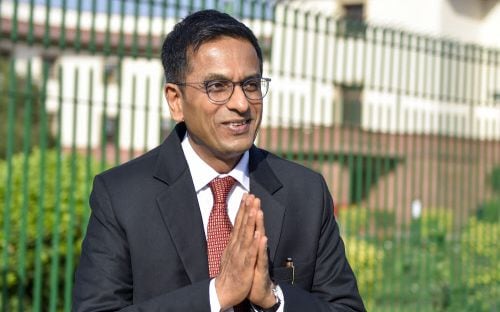 New Delhi: He is no stranger to the hallowed corridors of the Supreme Court over which his illustrious father presided for about seven years and four months, the longest in the institution's history.

Dhananjaya Y Chandrachud, however, had no qualms about overturning the judgements of father Y V Chandrachud on hot- button issues like adultery and the right to privacy.

The senior-most Supreme Court judge will now take over as the 50th Chief Justice of India on November 9, stepping into the shoes of his redoubtable father Y V Chandrachud, who was the CJI between 1978 and 1985, the first instance of a father-son duo occupying the most sanctified seat in the over seven-decade history of the highest court of India.

All women, irrespective of marital status ...

Equality not just achieved by decriminalisation ...

The formidable DY Chandrachud, has been part of several constitution benches and penned landmark verdicts at the top court, including those in the vexed Ayodhya land title dispute.

Justice Chandrachud will take the charge from incumbent CJI Uday Umesh Lalit, who recommended him as his successor to the Centre on October 11. He will serve as the chief of the expansive Indian judicial system for two years till November 10, 2024.

Justice Chandrachud was elevated to the top court on May 13, 2016.

He was on the benches that delivered path-breaking judgements on decriminalising same-sex relations when they partially struck down Section 377 of the IPC on the so-called unnatural sex (of carnal intercourse against the order of the nature), validity of the Aadhaar scheme and the Sabarimala temple issue, where women of menstruating age were barred from entering the Kerala temple.

Recently, a bench he headed expanded the scope of the Medical Termination of Pregnancy(MTP) Act and the corresponding rules to include unmarried women, even transgender, for abortion between 20-24 weeks of pregnancy.

A Justice Chandrachud-led bench had also passed several directions to mitigate the miseries faced by people during the COVID-19 crisis, terming the brutal second wave of the pandemic last year a "national crisis".

Recently, Justice Chandrachud was among the two judges of the apex court Collegium who objected to the method of "circulation" adopted for eliciting the views of its members on the appointment of judges to the top court.

Born on November 11, 1959, Justice Chandrachud is known for his love of the game of cricket which, according to some accounts, he played along with his father's staff in the backyard of the bungalow Chandrachud Sr. was allotted in Lutyen's Delhi.

A known workaholic, Chandrachud presided over a bench on September 30, 2022 that sat till 9:10 pm, around five hours beyond the regular working time of the apex court, to hear 75 cases to clear the board before the onset of the Dussehra vacations.

In a landmark verdict in February 2020, a bench headed by Justice Chandrachud ruled in favour of women officers in the Army getting permanent commission and command postings, rejecting the Centre's stand about their physiological limitations as being based on "sex stereotypes" and "gender discrimination against women".

Later, a bench that he led paved the way for granting permanent commission to women officers in the Indian Navy, saying a level playing field ensures that women have the opportunity to overcome "histories of discrimination".

On November 9, 2019, the apex court, in a unanimous verdict cleared the way for the construction of a Ram Temple at the disputed site in Ayodhya, and directed the Centre to allot a 5-acre alternative plot to the Sunni Waqf Board for building a mosque. Justice Chandrachud was part of the five-judge constitution bench.

He wrote the lead judgement for a nine-judge constitution bench in the Justice K S Puttaswamy versus Union of India case in which it was unanimously held that right to privacy constituted a fundamental right under the Constitution.

He was also part of a five-judge constitution bench that unanimously decriminalised part of the 158-year-old colonial law under section 377 of Indian Penal Code which criminalised consensual unnatural sex between consenting adults, saying it violated the rights to equality.

On another five-judge bench, Justice Chandrachud, held section 497 of the Indian Penal Code that criminalised adultery unconstitutional on the ground of being arbitrary, archaic and violative of the right to equality and privacy.

Registering a strong dissent, he differed with other members of a five-judge constitution bench which by a majority verdict upheld the constitutional validity of the unique biometric identity number Aadhaar.

He had concurred with the majority verdict in the Sabarimala case holding the practice of prohibiting women of menstruating age from entering the Sabarimala temple discriminatory and violative of women's fundamental rights.

Justice Chandrachud was also part of a landmark judgment by a five-judge constitution bench which recognised the 'living will' made by terminally-ill patients for passive euthanasia.

A bench headed by him had ordered the demolition of realty major Supertech's twin 40-storey towers in Noida held illegal for violation of norms.

Before that, he was designated as a senior advocate by the Bombay High Court in June 1998 and became Additional Solicitor General the same year till his appointment as a judge.

He practised law at the Supreme Court and the Bombay High Court and was a visiting professor of comparative Constitutional law at the University of Mumbai.

No case is small for Supreme Court: CJI DY Chandrachud

Structure of legal profession feudal, patriarchal and not accommodating of women: CJI Chandrachud