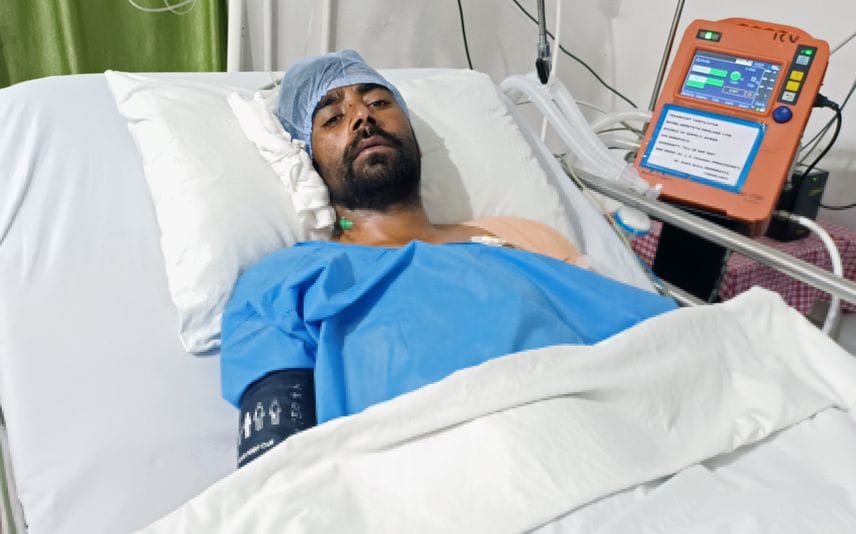 Rajouri (Jammu-Kashmir): A terrorist captured by the Indian security forces at the Line of Control near the Jammu region brought in focus the role of a serving Pakistani Army colonel in sponsoring terror attacks within the Indian territory.

As he recovers, Hussain told ANI on Wednesday that he had been sent along with three to four other terrorists were paid money by a Pakistani Colonel Yunus Choudhary to carry out a 'fidayeen' attack on Indian soldiers after crossing the LoC. Hussain received a bullet wound while his accomplices escaped.

"We were four-five people. We had come to die. We were sent by Pak Army's Colonel Choudhary Yunus. He gave us money to attack Indian posts," said Hussain responding to questions. He said that the group had four to five guns with them.

"We were asked to attack the Indian Army. I had come in 2016. This time we could not attack. The others ran away...After I was hit by a bullet, the Indian Army saved me," he added.

Army doctor Rajeev Nair said that when Hussain was brought his condition was quite critical. His life is saved but he will take several weeks to recover from his wounds, he said.

Asked if he did not find it ironical that a terrorist who had come to kill was being saved, the doctor said for them everyone who comes is a patient.

He added that Hussain is bed-ridden and it is Indian soldiers who are now feeding him.

In an official statement, Defence authorities said that in the last 48 hours, two major infiltration bids have been eliminated by alert troops deployed along the Line of Control in Naushera Sector of Rajouri district.

"On 21 August 2022, in the morning hours, alert soldiers deployed in Jhangar sector of Naushera spotted movement of two to three terrorists on own side of Line of Control. One terrorist came close to the Indian post and tried cutting the fence, when he was challenged by alert sentries.

"The terrorist tried to flee, however, was brought down by effective fire, incapacitating him. Two terrorists who were hiding behind, fled the area by taking cover of dense jungle and broken ground. The injured Pakistani terrorist was captured alive and provided with immediate medical aid and lifesaving surgery was carried out," the statement said.

It added that the captured terrorist revealed his identity as Tabarak Hussain, resident of Sabzkot village, district Kotli of Pakistan occupied Kashmir.

"On further interrogation, the terrorist confessed about their plan to attack the Indian Army Post. Tabarak Hussain stated that, he was sent by a Colonel of Pakistan Intelligence Agency named Col Yunus Chaudhry who had paid him 30,000 Pakistani Rupees. Tabarak also revealed that he along with other terrorists had carried two to three close recces of Indian forward posts with an aim to target them at an opportune time," the statement said.

It added that the go-ahead to target the Indian post was given by Col Yunus Chaudhry on 21 Aug 2022.

"Incidentally, the individual was earlier captured by Indian Army from the same sector in 2016 along with his brother Haroon Ali, and was repatriated on humanitarian grounds in November 2017," it added.

In the second operation, on the night of 22/ 23 August 2022, a group of two to three terrorists tried to infiltrate in Lam sector of Naushera(J&K). Our alert troops were able to observe the terrorists as they crossed the Line of Control and continuously monitored this movement. As they moved ahead into our minefields a series of mines got activated and two terrorists got eliminated on the spot, the Army statement said. (ANI)