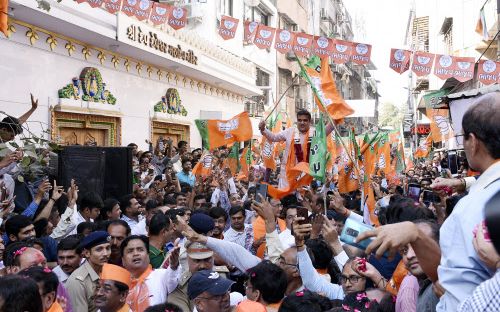 Gandhinagar (Gujarat): A long campaign by political parties with allegations and counter-allegations came to an end on Tuesday evening as votes are all set to be cast for phase 1 of the Assembly elections in Gujarat on December 1.

While the BJP is looking to retain its 27-year-long rule in the state, the Congress is hoping to ride the 'anti-incumbency' to come to power. The Aam Aadmi Party, which could not open its account in the 2017 Assembly elections, is looking to make in-roads to yet another state after Punjab with its party chief Arvind Kejriwal claiming to form a government with over 90 seats.

The tough battle is all set to be fought in two phases, on December 1 and 5 as the voters would cast their votes on the designated dates and at respective polling stations.

Speaking to ANI, Gujarat Chief Electoral Officer, P Bharathi said that all arrangements have been made for the first phase of polling on Thursday.

"Voting will be held on December 1. All arrangements have been made. Polling will happen in 19 districts. Training has been provided to polling staff. Webcasting will be done at 50 per cent polling booths," she said.

The CEO informed that the Central paramilitary forces have been deployed to ensure peaceful elections amid tight security.

"Central paramilitary forces have also been deployed. A total of 2,39,76,760 voters will vote in the first phase of the election," she said.

The polling will be held on December 1 and 5, while the counting of votes will take place on December 8.