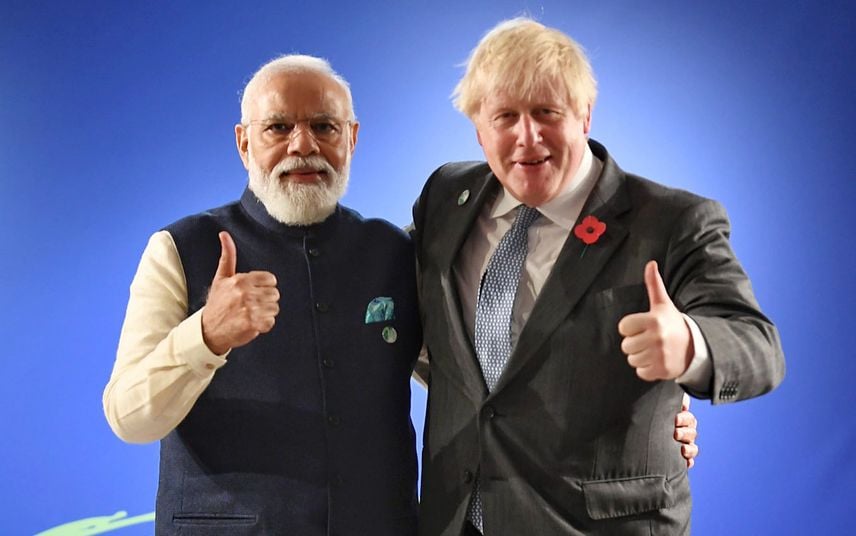 New Delhi: British Prime Minister Boris Johnson who is on a two-day visit to India will meet Prime Minister Narendra Modi on Friday to hold in-depth talks on the UK and India's strategic defence, diplomatic and economic partnership, aimed at bolstering close partnership and stepping up security cooperation in the Indo-Pacific.

On Friday morning, Johnson will attend a ceremonial reception at Rashtrapati Bhawan and later a wreath-laying at the Samadhi of Mahatma Gandhi.

The UK Prime Minister will also hold talks with External Affairs Minister (EAM) S Jaishankar. On the same afternoon, the two sides will issue a press statement at around 1 pm at Hyderabad House.

Johnson arrived in Gujarat on Thursday for the start of his two-day visit to India.

According to a statement by British High Commission, Johnson will use the visit to drive progress in the Free Trade Agreement (FTA) negotiations launched earlier this year as a deal with India is predicted to boost UK's total trade by up to 28 billion pounds annually by 2035 and increase incomes across the UK by up to 3 billion pounds.

Last year, Johnson and PM Modi agreed on a UK-India Comprehensive Strategic Partnership, announcing more than 530 million pounds in investment into the UK and committing to a deeper bilateral relationship across trade, health, climate, defence and security, and connecting our people.

India was also identified as a priority relationship for the UK in the 2021 Integrated Review and was invited by the UK as a guest to last year's G7 in Carbis Bay.

The third round of negotiations will begin next week and the two sides are keen to double bilateral trade by 2030.

The United Kingdom is also looking to increase its footprint in defence production in India.

British Prime Minister's visit to India beginning comes amid the rising importance of the Indo-Pacific and India's centrality in the region with the two countries set to further intensify cooperation across the full spectrum of bilateral ties.

The Russia-Ukraine conflict is expected to figure in the bilateral talks with Johnson putting forth UK position and listening to the Indian perspective while not lecturing India, sources said.

They said the two sides understand and respect each other's position on Ukraine and it will be part of the discussion.