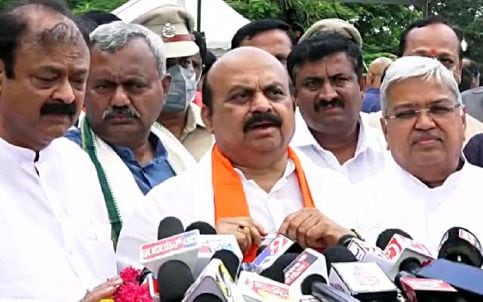 Speaking to media persons, the chief minister said the murder of the young BJP worker was a planned and organised crime.

"It has an interstate dimension. The issue has been discussed with state DG and IG and complete details have been sought. We will write to the Union Home Ministry requesting for investigation by the NIA," he said.

Giving details on tougher security measures, Bommai said CCTV cameras would be installed at all border crossing spots along the Kerala border.

Checkposts would be set up, temporary police camps would be setup at sensitive spots in villages in the coastal region. The vacant posts in the police department would be filled, night patrolling would be intensified and an additional battalion of KSRP would be deployed in Dakshina Kannada district, the chief minister said.

It has also been decided to intensify the investigation into the murder that happened yesterday in Suratkhal. Special teams should be constituted to crack the case. The chief minister said peace meetings would be held with religious leaders at district level.

Earlier on Thursday Karnataka Police said that they have arrested two people in connection with the murder of BJP Yuva Morcha worker Nettaru.

Superintendent of Police (SP) of Dakhshin Kannada while speaking to ANI said that till now, a total of 15 people were questioned, out of which 2 people were arrested.

He further added that they are also probing the possibility of a Kerala registration of vehicle used in the crime.

Praveen Nettaru, a young BJP worker, was attacked with lethal weapons by unidentified people on a bike in Bellare in Dakshina Kannada late Tuesday evening.

Karnataka Home Minister Araga Jnanendra while making a statement on the incident said that the involvement of the extremist Popular Front of India (PFI), and its political arm Social Democratic Party of India (SDPI), was suspected.