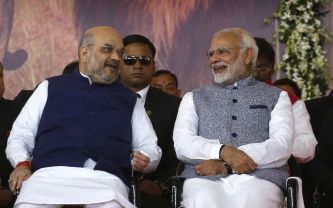 The entire city of Hyderabad has donned a saffron hue with the BJP flags and banners ahead of the party's mega show. The posters showcase the achievement of the central government. Every nook and cranny of the city is decked up with big cutouts and banners of top BJP leaders.

According to a senior BJP leader, the expansion of the party will be the key agenda of the meeting. They will also discuss areas where there is a need to induct more party workers.

"After 18 years, a national executive committee is being held in Hyderabad. The city is decked up. National leaders, CMs and other leaders are visiting 119 constituencies wherein a massive public rally is supposed to be held on July 3. We are expecting a huge crowd," Telangana BJP spokesperson NV Subhash told ANI.

There will be a photo exhibition where the senior leaders and photos from the earlier national executive meet and important events will be exhibited today at 6 pm.

Prime Minister Narendra Modi is expected to arrive in Hyderabad on July 2 and is likely to address the meeting.

"Tomorrow, PM Modi will arrive in Begumpet. We will have a public reception there," added NV Subhash.

"National executive meeting will start from 3 pm tomorrow and will continue till July 3 evening. At 6.30 pm on July 3, the Prime Minister will arrive at Parade Ground where a massive rally and public speech are organized...These three days will be influencing, wherein people will turn in favour of BJP," said NV Subhash.

Meanwhile, former MP K Visweshwar Reddy has announced that he will joining the Bharatiya Janata Party (BJP) in Telangana.

"I decided today that I'll join BJP in Telangana. Once Telangana achieved statehood, we all had great aspirations. We can do wonders with funds for one of the richest states. But what happened is exactly the opposite," said Reddy. He quit Congress last year.

Earlier on Friday, Nadda held the meeting of the party's general secretaries in Hyderabad. The BJP chief held a mega roadshow upon arrival in Hyderabad.

"It was a source of pride for me to lead this road show today in Hyderabad as it gave me the opportunity to be around our dedicated karyakartas and the people of the city. This love and affection I saw, shows the BJP's undeniable growing presence in Telangana," Nadda said in a Twitter post after the roadshow.

The BJP's initiative comes at a time when Telangana is heading for Assembly polls in 2023 and the BJP sees a huge prospect of bringing down the ruling Telangana Rashtra Samithi government.

Earlier, the BJP had held its national executive meeting in the city in 2004 when the party promised to carve out a separate state of Telangana without delay if it came to power.

Success in the recent Greater Hyderabad Municipal Corporation elections as well as the recent interaction of the corporators with Prime Minister Narendra Modi is said to be a huge turning point for the saffron party which is looking to make inroads in the Southern part of the country.

The Hyderabad city police, along with state government departments, have put elaborate security arrangements in place ahead of PM Modi's visit to Hyderabad.