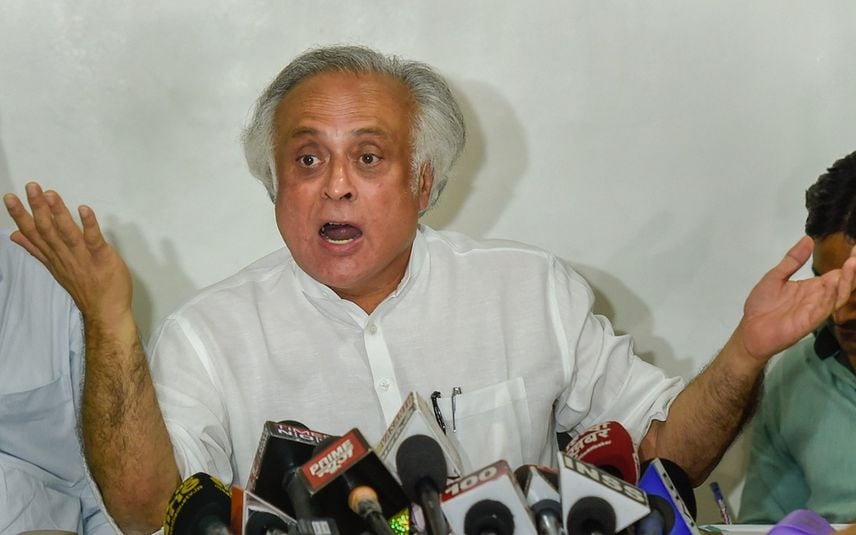 New Delhi:The Congress on Thursday accused the BJP government of capturing power "unethically" by use of money and muscle power, and condemned it for destablising democratically elected governments.

In a statement, Congress general secretary Jairam Ramesh said after coming to power at the Centre in 2014, the focus of the Bharatiya Janata Party (BJP) has been to capture power in the states and bring down the elected governments rather than serve the people.

"Through the naked display of money and muscle power, the BJP has undemocratically and unethically captured yet another state government. Under the Modi-Shah duo, the BJP wants to capture power at any cost, either directly or through remote control. What happened in Maharashtra is shameful for Indian democracy," he said.

The party's statement comes on a day rebel Shiv Sena leader Eknath Shinde was sworn in as the chief minister of Maharashtra.

In a move that stunned political pundits and potentially checkmated the Shiv Sena, BJP leader Devendra Fadnavis on Thursday announced that Shinde will be the next chief minister of Maharashtra.

Ramesh further alleged that offices of the Governors and Speakers, and agencies like the Enforcement Directorate (ED) and the Central Bureau of Investigation (CBI) are openly misused, adding that buying MLAs has become so commonplace that the Finance Minister blurted out the truth today, when she suggested imposition of GST on horse-trading.

"The BJP can go to any extent to win elections - From misuse of money power to polarisation and violence. Despite using all these tactics, if the voters reject them, then they start hatching conspiracies to topple elected governments," he said.

The Congress leader said in 2016, the BJP brought down the Congress government in Uttarakhand in a similar way, where due to Congress MLAs leaving the party, the government elected for five years was reduced to a minority in four years. In Arunachal the same year, 43 out of 44 Congress MLAs defected to the BJP-backed People's Party of Arunachal Pradesh under the leadership of Chief Minister Pema Khandu.

In the 2017 assembly elections in Manipur, the Congress party emerged as the single largest party by winning 28 out of 60 seats, he said, adding that the BJP had only 21 seats, but the Congress was not given a chance to prove its majority.

A similar game happened in Bihar in the year 2017 when the BJP unethically toppled the Grand Alliance government that lasted 20 months.

In 2019, the Congress-JDS coalition government was toppled in a similar way in Karnataka. In March 2020, when coronavirus struck the country, the BJP hatched a political conspiracy in Madhya Pradesh.

"When the world was preparing to deal with the challenge of coronavirus, the BJP government was busy toppling the government elected by the people. To win the Rajya Sabha elections in the year 2020, eight MLAs of Gujarat Congress were made to join the BJP. In the year 2021, something similar was seen in Puducherry as well. Even before the assembly elections, the BJP toppled the Congress government in the state," Ramesh alleged.

The Congress leader added that the BJP tried to form governments in an unethical manner on the basis of money power - first in Maharashtra and then in Rajasthan.

In November 2019, Devendra Fadnavis took oath along with 10 NCP MLAs at midnight, but then had to step down from power. In Rajasthan, the BJP tried to mislead 19 Congress MLAs, but their machinations failed and the Congress government continues to serve the people of Rajasthan, he added in the statement.