The incumbent UP Chief Minister Yogi Adityanath led the BJP to poll victory, riding a high-decibel election campaign, with thrust on the development agenda along with welfare schemes. Prime Minister Narendra Modi led the BJP's campaign from the outset, first by fully backing the Chief Minister and afterwards by leading an intense campaign in the state. 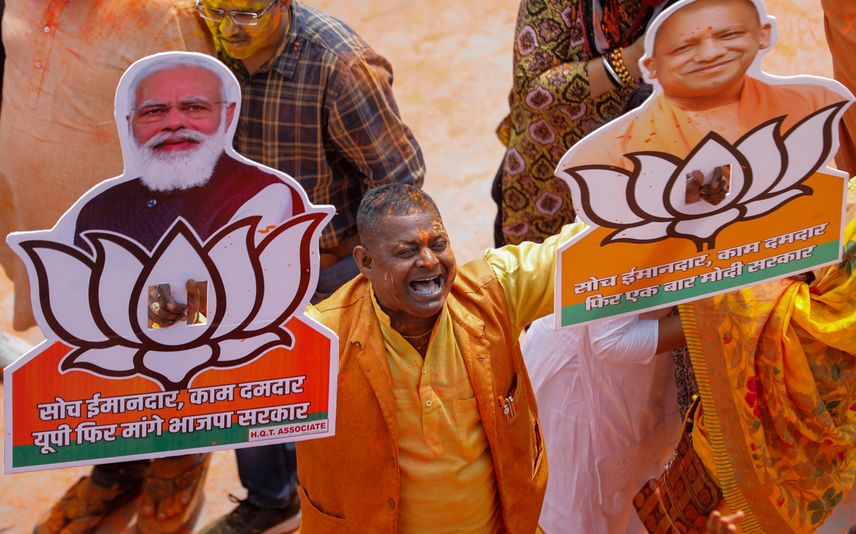 Lucknow (Uttar Pradesh): The BJP's comprehensive win in the Uttar Pradesh Assembly elections finally broke a 36-year-old jinx of the incumbent government being voted back to power in the state.

The incumbent UP Chief Minister Yogi Adityanath led the BJP to poll victory, riding a high-decibel election campaign, with thrust on the development agenda along with welfare schemes. Prime Minister Narendra Modi led the BJP's campaign from the outset, first by fully backing the Chief Minister and afterwards by leading an intense campaign in the state.

According to the latest data of the Election Commission of India on the trends of the counting of the votes, the BJP has crossed the majority mark of 202 Assembly seats in the state while leading in more than 245 constituencies, whereas the Samajwadi Party is leading on 122 seats and Congress leading only in one constituency.

Moreover, the exit poll results had also predicted that the monk turned politician, Yogi Adityanath is on course to retain power in Uttar Pradesh for the second time.

In Uttar Pradesh, the Indian National Congress had a stronghold in the 1980s as the party retained its power from 1980-88. However, the state witnessed political instability after 1988 with multiple political parties, including Samajwadi Party, Bahujan Samaj Party, and the BJP ruling the state in the 1990s.

However, BJP in 2000 again came to power by forming an alliance with the BSP and senior party Rajnath Singh was sworn in as the Chief Minister. In a major setback, the BJP could not even hold its government for a year as the BSP took back its support and broke the alliance.

Since then, the BJP could not come to power, and the state was ruled by the Samajwadi Party and Bahujan Samaj Party separately till 2017.

The BJP had swept 2017 polls in Uttar Pradesh, winning more than 300 seats and senior party leader Yogi Adityanath was sworn in as the Chief Minister.

The electorally-crucial state witnessed a multi-cornered contest with the ruling Bharatiya Janata Party (BJP), the Samajwadi Party (SP), Congress, and the Bahujan Samaj Party (BSP) vying for the popular mandate and creating history this time.

In Uttar Pradesh, the political parties held intensive electoral campaigns, but BJP and SP garnered most of the eyeballs. Congress also hit the ground hard, with the party general secretary Priyanka Gandhi Vadra's vivacious campaigns. However, BSP seemed to lag a little behind its rivals.

The BJP fielded its top leadership, including Prime Minister Narendra Modi and Union Home Minister Amit Shah, in the campaigning to bolster the party's support base.

During the campaigns, Adityanath, who is in the electoral fray from Gorakhpur Urban constituency, got a new name "Baba Bulldozer".

"Bulldozer" is a reference to the action taken by the Yogi government to vacate illegally occupied land and properties using the Bulldozer machine.

Moreover, PM Modi himself was deeply involved in the BJP campaigning for the UP polls and ensured that there was no factionalism in the party. The Prime Minister heaped praises on the UP CM Yogi Adityanath for the development works done in the state and coined a new slogan on "UP plus Yogi bahut hai upyogi (UP plus Yogi is very useful)".

PM Modi held rallies in Prayagraj, Kaushambi, Bahraich, Amethi, and a massive roadshow in Varanasi which attracted a huge crowd.

Assembly elections were held in Uttar Pradesh from February 10 to March 7 in seven phases to elect all 403 members of the Uttar Pradesh Legislative Assembly. (ANI)